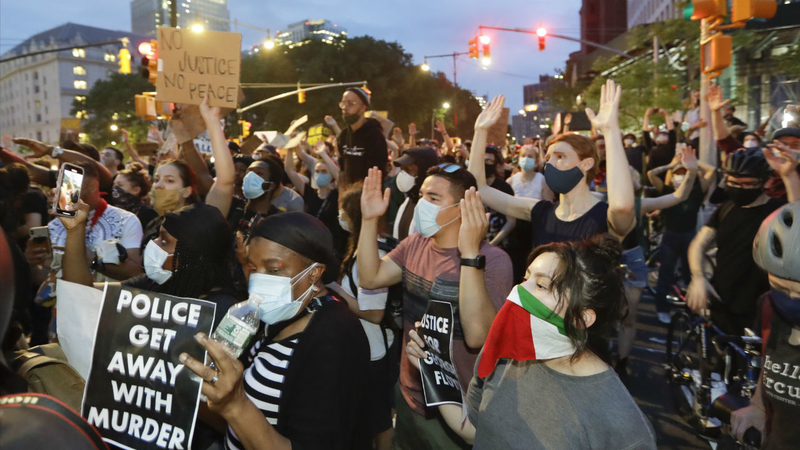 NEW YORK CITY (WABC) -- Mostly peaceful protests continued after curfew for a second night in New York City, officials are optimistic that the refinements to police tactics are helping restore order after days of unrest over the death of George Floyd.

Hours after Wednesday's curfew went into effect, thousands of people still continued to defy the curfew in Brooklyn and Manhattan.

Police began moving in on the crowds about an hour past curfew to start making arrests, at times using tactics like pepper spray that had brought outrage previously.
EMBED More News Videos

Earlier in the evening hundreds rallied outside Gracie Mansion, the mayoral residence, on the Upper East Side shortly before the curfew started at 8:00 p.m.

MOVEMENT MOMENT: Marchers sat in silence for several minutes in front of Gracie Mansion - many with fists and signs raised. @ABC7NY pic.twitter.com/Te1BAHxI8B

Marchers sat in silence for several minutes in front of the mansion - many with fists and signs raised - in honor of George Floyd, who was killed in Minneapolis after a police officer pushed his knee into his neck for several minutes.

Prosecutors charged the officer with a new more serious charge of second-degree murder on Wednesday, and for the first time leveled charges against three other officers at the scene, according to criminal complaints.

The updated criminal complaint against Derek Chauvin says the officer's actions were a "substantial causal factor" in Floyd's death.

Hundreds of protesters were in Manhattan's Washington Square Park when the charges were announced.

"It's not enough," protester Jonathan Roldan said, contending all four officers should've been charged from the start. "Right now, we're still marching because it's not enough that they got arrested. There needs to be systematic change."

Across New York City, from small gatherings on Staten Island to marches in Brooklyn, peaceful protesters let their voices be heard.

Like the day before, clashes of previous nights were mostly gone and looters did not steal their spotlight.

This is McCarren Park in Williamsburg right now. Thousands of people kneeling and sitting in silence. Seriously, listen. Our wounded city is indescribably beautiful in its hunger for justice. pic.twitter.com/vXKMJlGaB2

"Last night we took a step forward in moving out of this difficult period we've had the last few days and moving to a better time," Mayor Bill de Blasio said.
Gov. Andrew Cuomo, who was critical of the police response on prior nights, said the city was "much better" Tuesday and that officers were better equipped to keep the peace.

"Last night was a much, much better than the night before. So it worked. We got results. Let's just remember what we did last night and keep that going."Cuomo said.

Dave Evans has the latest details as New York City gears up for another night of protests.

The NYPD used several tactics to crack down on the looting that has plagued the city in recent nights, including arresting non-protesting groups of people after the 8 p.m. curfew went into effect. Officials said many tried to run as officers approached the groups, and police say they found items like bats and hammers on those they arrested. The NYPD reported 280 arrests compared to 700 on the previous night.

Citi Bike also shut down its service overnight, along with Revel motorized scooters. City officials say looters were using the scooters to get ahead of protests, bring supplies in for vandalism, and scout out police movements.

Both services were deactivated before the curfew went into effect, and it appeared to work.

The NYPD used several tactics overnight to crack down on the looting that has plagued the city in recent nights, including arresting non-protesting groups of people after the 8 p.m

Since last Thursday, the NYPD has made about 2000 protest-related arrests, including 500 burglary arrests, and is pursuing vandals and thieves responsible for citywide looting.

Police have recovered a "tremendous amount of stolen property" and detectives are going shop by shop seeking surveillance images.

Store owners were angry, frustrated, but said that they would rebuild,

"'We're not going anywhere,'" the mayor said the owners told him when they met with him.

The 8 p.m.-to- 5 a.m. curfew will continue through Sunday. The mayor said he was hopeful that the city would lift the curfew at the same time the city reopens into Phase 1.

Moving the curfew earlier from 11 p.m., where it had been Monday night, as well as blocking vehicles from entering Manhattan, allowed police to take control of city streets and remove troublemakers, Chief of Department Terence Monahan said.

"We also see a lot of people just peeling off, using the protests as cover and then peeling off and unfortunately running around and doing some looting," Shea said.

A memorial service for George Floyd will take place in Brooklyn on Thursday afternoon.

The service, which will happen before a bigger memorial service in Minneapolis, is slated for Thursday, June 4, at 1 p.m., at Cadman Plaza Park.

Both services will be broadcast on Channel 7 and streamed on abc7ny.com starting at 1:00 p.m.