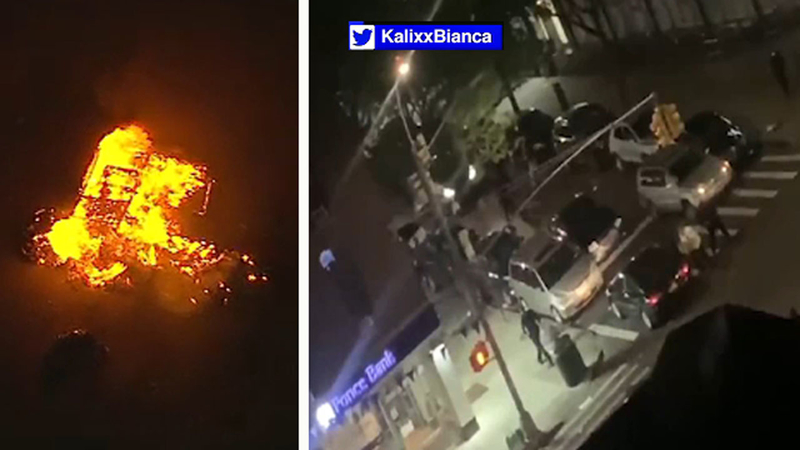 TREMONT, Bronx (WABC) -- A pattern of violence continued in New York City overnight, despite the 11 o'clock curfew that expired at 5 a.m. Tuesday.

This time the violence spread into the Bronx, with fires, looting and officers attacked.

Cellphone video circulating on social media showed a sergeant struck at the intersection of Walton Avenue and East 170th Street in Tremont.

It happened around 12:45 a.m. Tuesday as the officer was responding to reports of break-ins nearby.

In another incident, an officer was assaulted in front of a Claire's store on East Fordham Road and East Tiebout Avenue.

The attack was caught on camera, and the video was posted on the Sergeants Benevolent Association's Twitter account.

NYPD Cop attacked in the Bronx. I guess the critics will now say he overreacted. NYPD Cops defend yourselves, you are alone! pic.twitter.com/424w5bZbC6

Break-ins were reported in multiple locations around the borough.

Police with helmets on were seen marching down Burnside Avenue after reports of people throwing objects at officers as other set fires in the street and looted stores.

Bronx Borough President Ruben Diaz Jr. said what happened Monday night was not protesting nor was it a way of getting justice, it was criminal.

Diaz Jr. said what happened Monday night was not protesting nor was it a way of getting justice, it was criminal. He said it was a direct assault on what the community has accomplished.

"The Bronx is better than this," another official added.