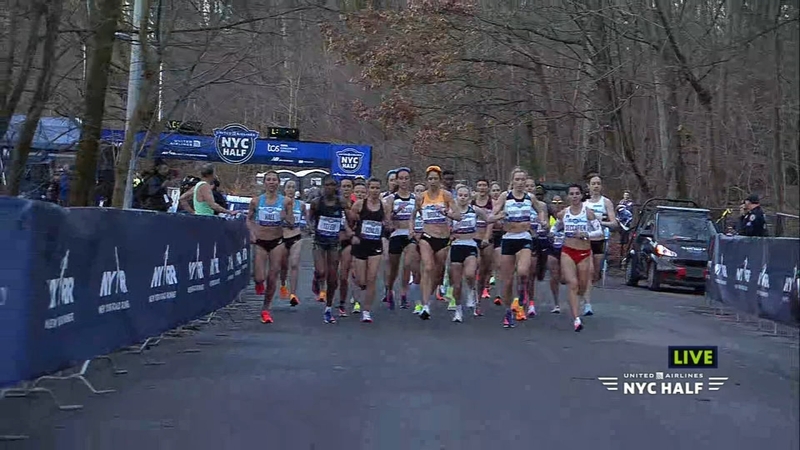 NEW YORK -- The United Airlines NYC Half is well underway, but many of the top professional runners have already crossed the finish line in the 13.1 mile course.

Senbere Teferi took home first place with a dramatic finish in the women's race with a record time of 1:07:35.

The first person to cross the finish line overall was American Paralympic athlete Daniel Romanchuk, who finished the men's wheelchair with a time of 49:22. It's his second consecutive win in this race.

On the women's side, Manuela Schar was the first to cross the finish in the women's wheelchair race with a time of 56:12. She also won the race in 2016 and 2018.
EMBED More News Videos

Manuela Schar was the first to cross the finish in the women's wheelchair race with a time of 56:12.

The NYC Half became the first NYRR race back at full scale, with Olympic and Paralympic medalists, celebrities, youth, and runners of all ages and abilities part of the 25,000-strong field. One of the city's signature races, it took runners on a 13.1-mile journey from Brooklyn's Prospect Park to Manhattan's Central Park.

Sunday's race is the first time the NYC Half has been held in three years, after being cancelled in 2020 and 2021.

Coverage of the event included live updates on Eyewitness News between 6:00 a.m. to 10:00 a.m. ET on Sunday.

The first person to cross the finish line of the NYC Half was American Paralympic athlete Daniel Romanchuk, who finished the men's wheelchair with a time of 49:22.

"New York City will be running again at full capacity on March 20 at the 2022 United Airlines NYC Half. We are excited to have a full race field again as our runners take over the streets of Brooklyn and the heart of Manhattan," said Ted Metellus, NYRR VP of Events and Race Director. "This marks the only time other than New Year's Eve that Times Square welcomes thousands of people, as it will host our professional athletes, Rising New York Road Runners and participants from all walks of life and various communities who will have the opportunity to run through it under the bright lights."

Get Pre-Race and Race-Day Information for runners, spectators and more at NYRR.org

Rhonex Kipruto pulled away from the competition to win the men's race with a time of 1:00:30.

Along with the main event, there was a virtual race, multiple activations from partners, celebrity runners, and youth running through the heart of New York City.

The race took runners past historic landmarks and diverse neighborhoods and showcases sweeping views of the city along the way before ending near the iconic TCS New York City Marathon finish line.

Susannah Scaroni's story is a remarkable one of a para athlete who survived a serious accident training her way back to the NYC Half, though her journey was derailed by COVID

Below are some highlights and initiatives at the 2022 United Airlines NYC Half:

Former Giants running back Tiki Barber joins Eyewitness News meteorologist Brittany Bell at the NYC Half to talk about the organization Team For Kids.

Times Square Kids Run: In the middle of Manhattan, the field will ran alongside 1,000 young runners from schools across New York City who took part in the 1,500-meter out-and-back course. This event, free and open to participants 8 to 18 years old, is part of Rising New York Road Runners, NYRR's free year-round youth program.

Partner Activations:
- United Airlines will present the Tri-Hero Challenge, honoring New York City frontline workers. NYPD, FDNY and HSS running teams will compete against each other for the fastest race time. United Airlines will donate to each team's charity of choice based on their Challenge results. Runners can also vote at the Experience on the team they think will win. United Airlines donations will total $100,000.
- The race will see the return of the United Airlines NYC Half app, powered by TCS. Spectators can track runners and create cheer cards. Virtual racers can also track their run in the app while enjoying an audio experience.
- Flow, a boxed water brand that values sustainability, is serving as NYRR's new hydration partner. Runners will be able to find their product at the Experience and in the race recovery bag.

United Airlines NYC Half Experience presented by New Balance: From March 17-19, runners will pick up their bibs and race souvenirs and be able to shop for race merchandise at a new location this year at Center415, located at 415 Fifth Avenue in Manhattan (between 37th and 38th streets). Each runner may bring one guest, and both runners and their guests must be able to provide full proof of vaccination against COVID-19.

Sustainable Medal: NYRR is excited to continue its commitment to sustainability efforts by offering sustainable finisher medals for the first time at this year's race. The medals are produced domestically from recycled metal, reducing the impact on the environment.
How to Watch: The 2022 United Airlines NYC Half will be covered locally in the tri-state area by ABC New York, Channel 7. Event coverage will include live news cut-ins between 6:00 a.m. to 10:00 a.m. ET, from Central Park and Times Square. Additionally, the four professional fields will be covered by a live stream, distributed internationally from NYRR's digital channels, abc7ny.com and the ESPN App, beginning at 7:00 a.m. ET.
Virtual United Airlines NYC Half Powered by Strava: Runners unable to make it to New York can still participate in the event virtually, running the 13.-1 mile distance anywhere around the world at their convenience between March 12 and March 20.