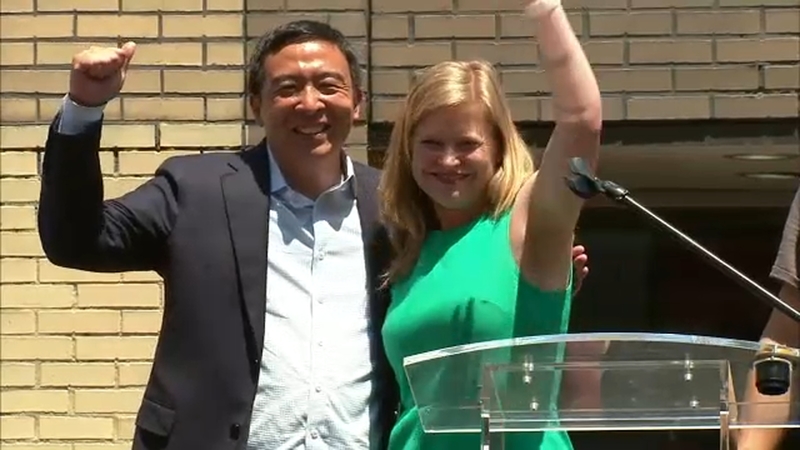 NEW YORK CITY (WABC) -- Almost 200,000 New York City residents voted early in the Democratic Mayoral Primary Election and the candidates are working hard to give everyone else a reason to get to the polls Tuesday.

A new poll out shows that Garcia is slipping to third at 15% as Eric Adams leads at 28%, with Andrew Yang trailing behind at 20%.
EMBED More News Videos

NJ Burkett has the latest on the mayor's race in New York City.

The news comes as a disappointment to Garcia, who has been trying to close the gap. She is emphasizing her experience as a commissioner and a crisis manager for the city, claiming she is not a politician.

Over the weekend, Yang and Garcia campaigned together multiple times, which frontrunner Eric Adams took issue to, saying they're trying to weaken minority votes.

"We're campaigning together to send a message that people should get out and vote, make voices be heard and rank choice voting enables people to express their preference in more than one candidate," Yang said. "We should take advantage of that."

However, Adams says he thinks "it's a last-minute move out of desperation."

In Brooklyn Monday, Maya Wiley was running hard on the sweltering streets of East Flatbush. The civil rights attorney, who has said she knows a racism when she sees it, says that there's nothing racist about a campaign partnership between Garcia and Yang.

"Candidates deciding to run together is a legitimate way of deciding what their strategy is," Wiley said. "There's nothing racist about that. Ranked choice voting is about giving voters the opportunity to say what their first choice, second choice, third choice is."

The two candidates first campaigned together this past weekend, each telling supporters to rank the other candidate second in the city's first-ever rank-choice voting -- a strategy clearly-intended to upend Democratic frontrunner Adams who insisted the strategy was racially-motivated.

"They're saying that," Adams said. "'We can't trust a person of color to be mayor of New York,' where the city is overwhelmingly people of color."

Yang and Garcia campaigned in different parts of the city Monday while carefully avoiding any direct response to Adams' comments.

"I am solely about making sure that every New Yorker's voice is heard and that everyone uses every one of their rank choices," Garcia said.

Yang says he thinks his campaigning with Garcia "speaks volumes about the kind of leadership that this city has been lacking for far too long."

A poll released this morning shows Adams with an eight-point lead over Yang, who is running second, which might explain why Adams went on the attack Monday.

"I'm still scratching my head-what is Andrew Yang still doing in this race," Adams said. " Listen, we know Andrew Yang is a fraud. He's a liar."

Meanwhile, Wiley thought it best to take the high road.

"Look, I can't speak to how voters are going to respond voters will make their own choices," she said. "I can only say that, as a candidate and as the next mayor of New York City, I'm going to work to pull folks together."