CeFaan Kim has more on the innocent 17-year-old shot and killed in the Bronx.

MORRIS HEIGHTS, Bronx (WABC) -- A 17-year-old basketball star was shot and killed in the Bronx Sunday night, the latest victim in an uptick of gun violence across New York City.

Police say Brandon Hendricks was gunned down on Davidson Avenue in Morris Heights just before midnight, shot in the neck and pronounced dead at St. Barnabas Hospital.

His family says the teen was attending a birthday barbecue for a friend when he was shot and killed.

"I grabbed him and we kept running until we got further," Hendricks' friend Hammad Singleton said. "When we got further he started losing his balance."

Singleton thought it was fireworks at first. Until his best friend told him he had been shot.

Hendricks' friend held him until his last breathe.

"He was telling me he loved me. And to call his mom," Singleton said. "Those were like his last words to me."

He says it has been a surreal day for the family.

According to Ellison, Hendricks' mother would often say "I gotta get him out of this neighborhood."

The teen was on his way out, headed to college. He just couldn't get out in time.

Candles now light his building lobby, where his light shines no more.

"You do all you can. You force the kid to get good grades. You treat him like he's on top of the world. And he's done everything we've asked for. And his reward should not be an early death," Ellison said.

Hendricks was a star on the hardwood, but more importantly, a star off the court too.

"It's been instilled in him since childhood that he had to go to college," Ellison said. "He knew that that was the goal, it was his responsibility to study hard and get the grades to do it. He's won a couple of basketball awards for being high in his academic stuff."

Hendricks graduated from James Monroe High School last week and was described by head basketball coach Nigel Thompson as "our leader on and off the floor for the past two seasons."

"I'm pretty certain that the bullets that took Brandon's life were not meant for him," he wrote in a social media post. "He wasn't that kind of a kid."

Here is the full text of the coach's post:

"I have so many fond memories of the short time that I spent with Brandon while he was with us on this Earth. He was a charismatic, humble young man. He listened and respected everyone. He was an awesome team mate. Thoughtful, kind and caring. Full of life and positivity. I've never met anyone who had anything bad to say about him. He was a remarkable basketball player. Incredible handle and quickness. He was our leader on and off the floor for the past 2 seasons. Just graduated from HS two days ago. His whole life ahead of him...why did he have to be taken from us so soon? I have so many special memories of Brandon that I'll treasure for ever. Many of them on the court during our countless hours of practice. Many of them in the games. Win or lose we could always count on him to fight and give his best. Some of my fondest memories of Brandon was not on the court but in my Geometry class. Brandon was so inquisitive and intelligent. His questions, thoughtfulness and summaries always moved the class forward. He would bounce around the class helping his classmate until they got it. His effort in class was equal to his effort on the court...why was he taken away so soon? What can we do as a community and a society to prevent our Princes from killing each other so senselessly? I'm pretty certain that the bullets that took Brandon's life were not meant for him. He wasn't that kind of a kid. But those bullets should not have been meant for anyone. We need to find a way to get our young brothers to value not just the lives of others, but to value their lives. Two lives were lost last night. Two families will be devastated, and our hearts will be eternally broken. The senseless violence has to stop. We've lost a special part of our family. RIP Brandon."

"This is a deep loss for me as an uncle. But it seems like it's also a painful loss for the community at large," Ellison said.

"I've met the mayor, I've met all the elected officials that represent our district. Clearly policing is a tough job and he does what he can. All we can do is ask for his prayers," Ellison said.

The uncle says the family is willing to be a part of any potential forum that may help address the violence.

There are no arrests, and the investigation remains ongoing.

The incident came after a weekend marked by shootings across the five boroughs that included a double homicide in East New York.

Police have released a photo of the suspect wanted in that case, identified as 47-year-old Charles Hernandez. 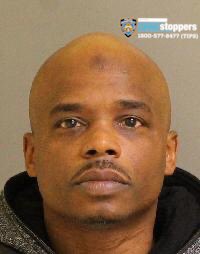 Hernandez allegedly fired 27 shots that struck a 23-year-old man and a 39-year-old woman on the front stoop of a home on Van Siclen Avenue.

Police say Hernandez was sentenced to five to 15 years in 1992 for assault, weapons possession and reckless endangerment. He returned to prison in 2006 on a 12- to 15-year sentence for criminal possession of a weapon and was released on parole in October 2018.

Homicides are also up, with 174 this year compared to 143 at this point last year.

NYPD Chief of Department Terence Monahan blames the uptick in shootings on the ongoing unrest along with bail reform.