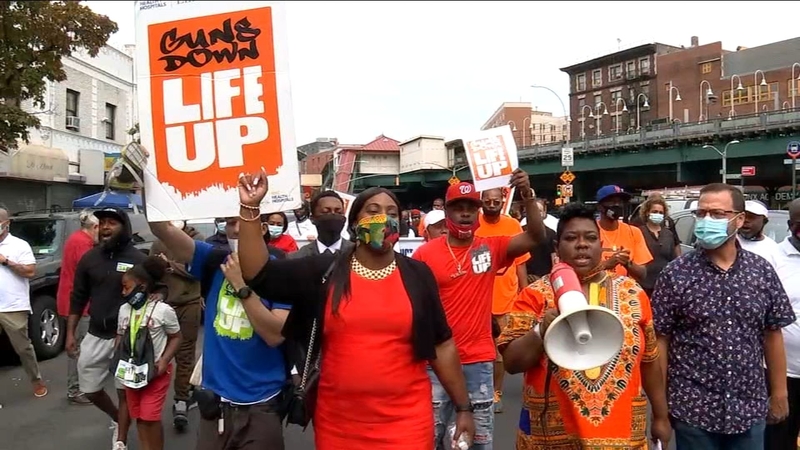 NEW YORK CITY (WABC) -- The NYPD released new crime statistics Wednesday for the month of August, and the dramatic increase in shootings has fueled an alarming rise in violent crime across the city.

There were 242 shootings last month, compared to 91 in August of 2019 -- a 166% increase. The number of shootings rose in all boroughs except Staten Island.

The number of murders citywide increased from 36 to 53 for the month, a 47% rise.

The NYPD says its efforts to address the surging violence includes shifting officers to areas experiencing upticks in shootings, collecting timely intelligence about crime and criminal conditions and addressing them in real time, a combination of short and long-term investigations to root out the persistent drivers of violence, and having officers engage with residents at the grassroots level through Neighborhood Policing to focus on the problems and solve them locally.

"Despite all the continuing challenges, our NYPD officers are undaunted," Police Commissioner Dermot Shea said. "The work of our officers represents the best of the policing profession, and it continues as they increasingly engage with all of our community partners to protect life, prevent crime and build safer neighborhoods."

Related: Is there an NYPD work slowdown? City officials want an investigation

The new stats come as activists are calling for more resources and a push for peace ahead of anticipated violence over Labor Day weekend.

"My office is holding this march to show Bronx residents that we support them in the fight against senseless shootings," he said. "We have seen too much violence this summer; too many lives lost. It must end now. I hope members of our community will join us as we march through a neighborhood that has been plagued by gunfire, including four shooting incidents that killed two men this past weekend. Additionally, there will be a resource fair at the end of the march to provide information on employment, healthcare and re-entry services. There will also be free COVID-19 testing on site."

As the city prepares for the holiday weekend, which typically reflects an increase in shootings, community-based organizations are preparing to show a visible presence and increased deployment in order to diffuse conflict to the greatest extent possible.

The annual West Indian Day Parade will be celebrated in a series of small performances in an online Zoom event, where up to 3,000 people will be able to watch.

The parade is one of the city's biggest events and draws as many as three million people, a Labor Day tradition in New York to honor immigrants from the Caribbean. But while it has been an overwhelmingly festive event, it -- and the J'ouvert that precedes it -- has been marred by acts of violence in recent years.

As a results, community leaders and activists are urging people to stay off the streets this weekend and to celebrate their heritage in their own homes and backyards.

Police are searching for the man who tried to rape a woman at an Upper East Side subway platform.