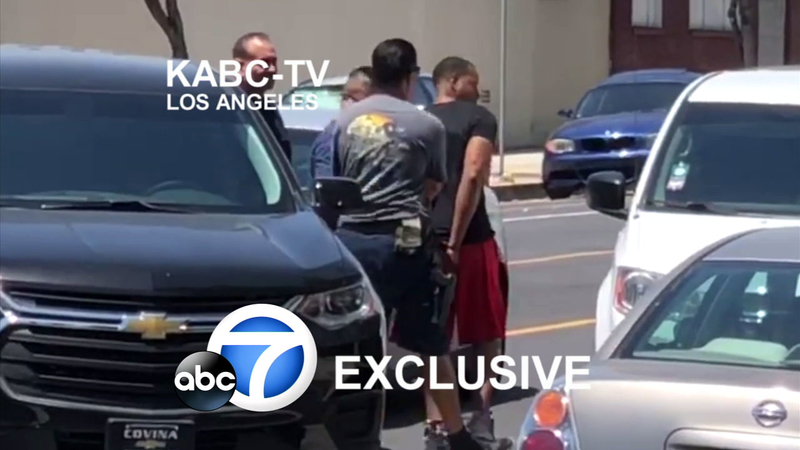 LOS ANGELES -- In exclusive video obtained by our sister station KABC-TV, a witness captured the hourslong arrest of a man in Los Angeles who is suspected of murdering a Queens nurse.

Los Angeles police arrested 27-year-old Danuel Drayton on Tuesday after he was found in North Hollywood with a bound woman who he allegedly planned to kill.

Authorities said Drayton is suspected of raping and torturing the woman.

The witness captured video footage of Drayton getting put into a law enforcement vehicle after about five hours of dealing with LAPD and U.S. Marshals.

"He just had a blank stare on his face," George said. "When I got there, this is when I took the video and was like, 'Wow. Crazy.'"

The footage shows Drayton in handcuffs and shackles as he's placed into a vehicle.

George said he lives just feet away from the location where Drayton was found. He said he'd seen Drayton days earlier on the victim's balcony smoking cigarettes and casually talking.

Drayton faces charges for attempted murder, penetration with a foreign object and false imprisonment. His bail is set at $1.25 million. He refused to appear at his arraignment hearing on Friday.

Law enforcement sources said they believe Drayton is connected to as many as seven murders. The NYPD said they suspect he is responsible for killing 29-year-old Samantha Stewart, a nurse who was found dead in her Queens home on July 7.

She suffered trauma to her neck and head, and her body was discovered by her father. Kenneth Stewart questioned why police released Drayton without bail after he'd been arrested for choking his girlfriend days before Stewart's murder.

Authorities also believe Drayton used dating websites and apps to meet and victimize women. Reports indicate he may have admitted to six other murders in New York, Connecticut and California. Investigators are working to verify those claims.

Police in New York were able to track Drayton down after finding his vehicle abandoned at JFK Airport.

Authorities are asking any other possible victims to come forward.