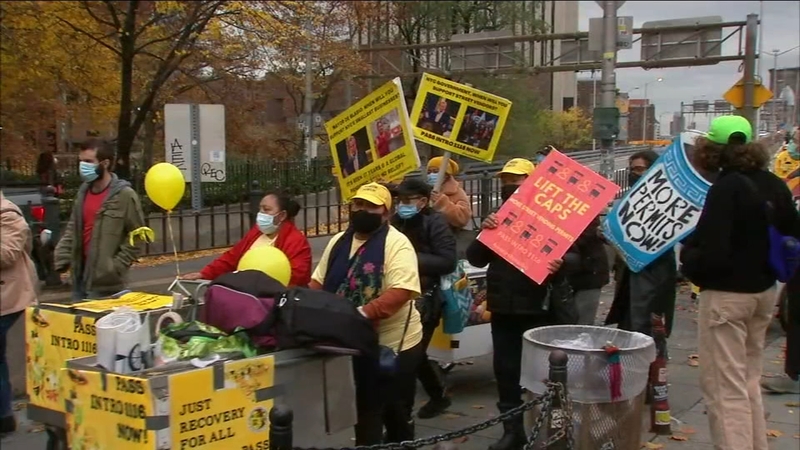 They say they're the target of over-policing and a lack of permits and are struggling financially as result in addition to the hardships they're already dealing with due to the coronavirus pandemic.

More than 100 street vendors marched across the Brooklyn Bridge.

"People have not been out on the street consuming from street vendors, people aren't able to pay their rent, they can't pay for food," Leticia, the daughter of a vendor, said.

Leticia's mother, Maria, has been a vendor for 34 years, a job that's been vital for her family.

"All the money she made while she was working was to put me through school," Leticia said.

While the City has allowed restaurants to expand onto sidewalks and streets many of the vendors say they've seen a crackdown on enforcement and haven't been able to acquire the permits they need.

They say both issues can be solved by passing a new bill.

"We owe it to them to get this passed, we need leadership and we need it now," New York City Public Advocate Jumanne Williams said.

It's an issue that made headlines last year after police arrested a woman for selling churros.

Tatiana mattos/queens neighborhood united 12:59:41 "We have been working alongside vendors to stop the over-policing and the abuse vendors have gotten from being over-ticketed," Queens Neighborhood United's Tatiana Mattos said.

"We had enough of waiting, we have enough of broken promises," _____ said.

They say they are making noise because they're at their whit's end and simply trying to survive.

"No work no rent no money, my husband is not working," Maria, a street vendor, said.

They're asking for anything to help them keep going for their families and for the vitality of the city.