Why do New York City subways flood and can it be prevented? 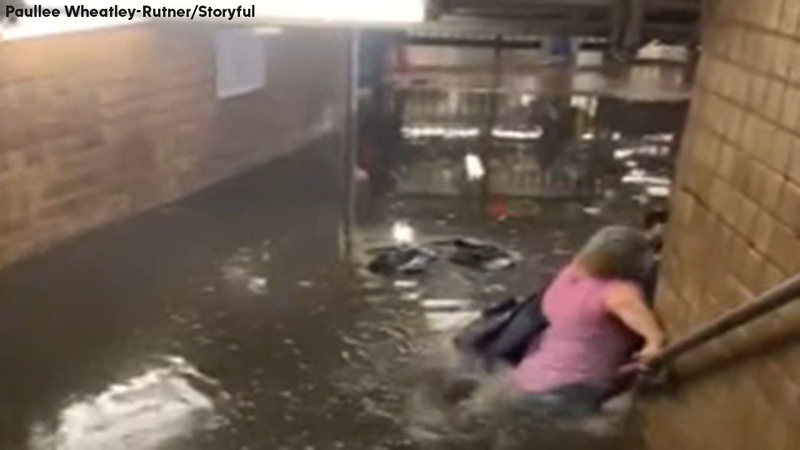 Why are subways flooding?

NEW YORK CITY (WABC) -- Videos of water pouring into subway stations during storms in New York City are not all that uncommon, but the scene that played out during severe weather Thursday -- with people wading through waist-deep water -- is alarming and dangerous.

So how did it happen? And is there something that can be done to prevent it?

Straphangers at the 157th Station in Washington Heights should have followed the same advice given to drivers traveling towards standing water, namely, "Turn around, don't drown." But that's not what happened.

Straphangers at the 157th Station in Washington Heights attempt to wade through waist-deep water with a garbage bag after heavy downpours flooded the station Thursday.

The Thursday deluge overwhelmed many subway stations, unfortunately just as ridership is beginning to increase.

The 3-inch-per-hour rains overwhelmed the subway pumps, filling up some stations like jugs of water.

"I wouldn't take subway flooding out of context," Paaswell said. "Of the fact that we were hit with an enormous storm."

Paaswell says the MTA should continue to make moderate improvements like raising the grates, installing more flood doors, and increasing capacity of pumping.

But that's it, because he says millions of dollars in infrastructure improvements are not worth it to deal with rare flooding events.

And in the worse case scenarios like this one, the MTA should simply close the stations until the water recedes.

"The subway still has to address cleaning up, addressing this, figuring out what's going to happen next time," he said. "Hoping these 3-inch-an-hour rains don't come more than once a summer."