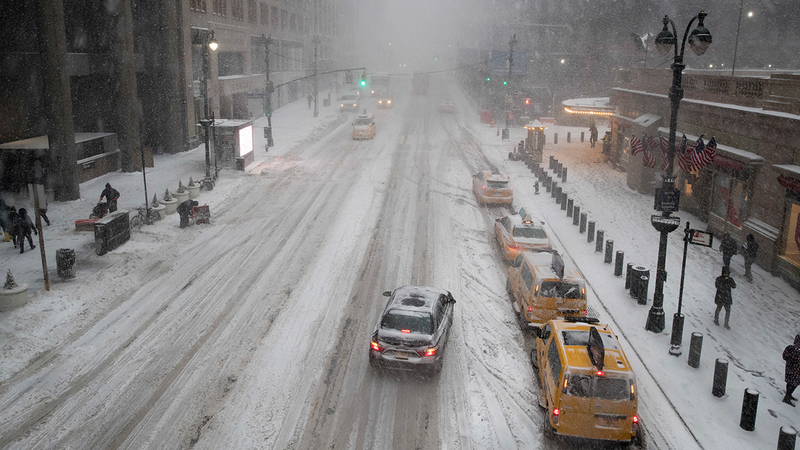 NEW YORK (WABC) -- The nor'easter created dangerous traveling conditions and police reported hundreds of motor vehicles accidents around the Tri-State area on Wednesday. The storm also created problems for mass transit riders, especially in New Jersey, and for travelers trying to fly into or out of the New York area airports.

New Jersey State Police say they responded to 506 motor vehicle crashes and 939 motorist aids since midnight in their patrolled areas.

Hundreds of drivers were stranded on Route 280 in New Jersey.

Subway service is back to normal following earlier delays due to signal problems and poor visibility, but some trains are being stored underground on select tracks, causing E and F trains to run local from Jackson Hts-Roosevelt Av to Forest Hills-71 Av.

All bus service was running with delays because of inclement weather conditions.

Road conditions deteriorated in the city, even after the Department of Sanitation pre-deployed 693 salt spreaders and had 1,500 plows ready to roll.

Alternate Side Parking Regulations are suspended again Thursday to facilitate snow removal operations, and New Yorkers are urged to take mass transit if possible and allow for extra travel time.

The Staten Island Ferry is operating on a modified schedule, and passengers should allow for extra travel time. NYC Ferry service may be impacted by winter storm conditions, and riders should prepare for potential weather-related delays. Service changes and/or suspensions will be posted on Ferry.NYC and announced via social media, app notifications, and email.

The Port Authority Bus Terminal and George Washington Bridge Bus Station are closed and will reopen Thursday morning at 5 a.m.

Due to high winds and road conditions motorists are asked to drive at reduced speeds of 20 mph on MTA bridges.

A Severe Weather Schedule Level 1 is in effect. Commuters can find that schedule at NJTransit.com.

The LIRR is operating on a regular weekday schedule as conditions permit, but service was temporarily suspended on multiple lines.

Hourly eastbound service is operating from Penn Station to Ronkonkoma, Hicksville and Babylon.

Limited eastbound service is restored on the Hempstead and Oyster Bay branches.

Metro-North was operating a reduced weekday schedule with some combined/canceled trains and hourly service after 8 p.m. to ensure customer safety during the storm event.

The MTA said Metro-North could temporarily reduce or suspend service if more than 10 inches fell in order to clear tracks and avoid stranding trains.

Amtrak service has been temporarily suspended between New York City and Boston until at least 10 a.m. on Thursday due to inclement weather. Service will be restored pending improved conditions.

Amtrak Downeaster Service north of Boston and Amtrak Shuttle Service between New Haven, Conn., and Springfield, Mass. will continue to operate as scheduled.

Please visit amtrak.com/delayalerts to get updates.