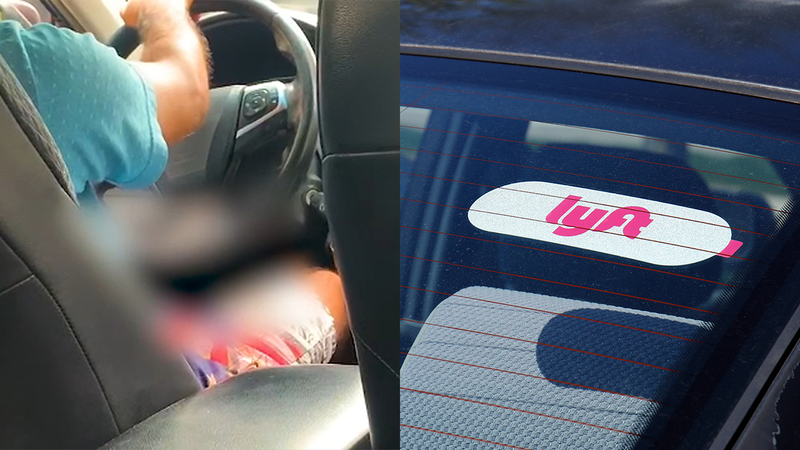 The woman, who asked to go only by Kathleen, said she recorded the driver's actions for her own protection and exited the car as soon as she safely could.

The incident happened in early September.

"I was appalled and disgusted," Kathleen said. "No woman should have to go through that."

Eyewitness News has also learned of another allegation against a different Lyft driver.

The rider, who asked to remain anonymous, said her driver pulled off course, turned off his app, and tried to sexually assault her during a late-night ride in June.

That rider said Lyft suspended her account when she complained and failed to follow through on investigating her allegations.

Eyewitness News reached out to Lyft about both drivers, and a spokesperson said the men would no longer be allowed to drive for Lyft.

"The safety of our community is fundamental, and both incidents described are unacceptable," said the Lyft spokesperson. "We have been in touch with the riders involved to offer support and have permanently removed these drivers from the Lyft community. We stand ready to work with law enforcement."

Both women have hired attorney Mike Bomberger, who is representing over a dozen women in a lawsuit filed in San Francisco accusing the rideshare company of not doing enough to protect riders from sexual assaults by drivers.

"I think that Lyft has sent a clear message that they are indifferent to these assaults occurring in their vehicles," Bomberger said. "They have taken policies to silence these women."

The rideshare is also adding new options for riders to more easily call 911 from inside the app and share their location with friends and family.

In a statement responding to the lawsuit, Mary Winfield, Lyft's head of trust and safety, said Lyft is "committed to providing safe transportation."

"Our commitment is stronger than ever as we dedicate more resources in our continued effort to ensure our riders and drivers have the safest possible experience," Winfield said.

Kathleen called the steps taken by Lyft progress but added she believes Lyft needs to do more to prevent encounters like hers.

"I think it's imperative for them (Lyft) to have recording devices in their cars because if they (the drivers) know they are being watched and they are being recorded, I think the sexual predators would have no reason to employ with Lyft," Kathleen said.

The New York City Taxi & Limousine Commission bans drivers from having any sexual contact with riders in the course of their job. Violations of the rule can result in financial penalties and criminal action.

According to the TLC, it has taken prosecutorial action against 52 drivers since 2016 in response to allegations of inappropriate sexual behavior.

Complaints about sexual behavior represent less than 1% of the more than 33,000 complaints TLC has received about drivers in 2019.

DO YOU NEED A STORY INVESTIGATED? Danielle Leigh and the 7 On Your Side Investigates team at Eyewitness News want to hear from you! Call our confidential tip line 1-877-TIP-NEWS (847-6397) or fill out the form BELOW. You can also contact Danielle directly: Danielle Leigh Email your questions, issues, or story ideas to 7OnYourSideDanielle@abc.com Facebook: DanielleLeighJournalist Twttier: @DanielleNLeigh
Report a correction or typo
Related topics:
new york citylyft7 on your side investigationsexual misconduct
Copyright © 2021 WABC-TV. All Rights Reserved.
7 ON YOUR SIDE INVESTIGATION