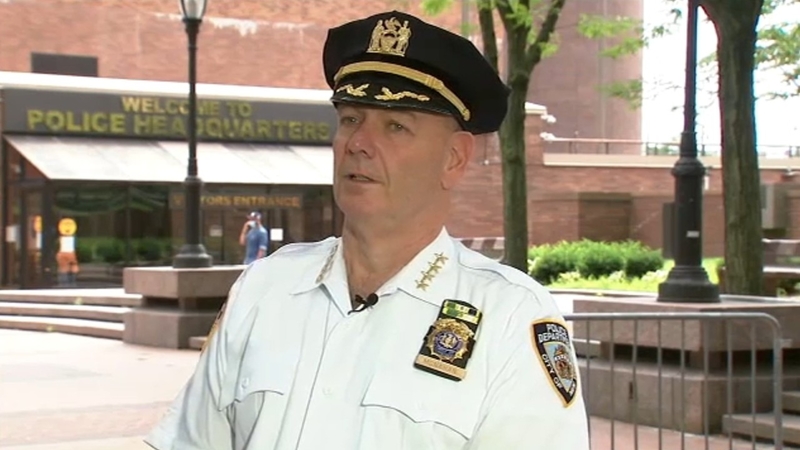 Chief Monahan: 'Hate of police' reason for spike in violence

LOWER MANHATTAN (WABC) -- In a one-on-one interview at NYPD headquarters Thursday, the chief of department, Terence Monahan told Eyewitness News that the single biggest reason for the sudden spike in violent crime in New York City is not the gridlocked court system and not the economy, it's a deep-seated "hatred of the police."

"The animosity towards the police right now-that really is probably the biggest thing that we're seeing," Monahan said. "There's a feeling on the street that the police can't enforce the laws like they did in the past. It's important for us to get communities out there to say, 'No we want the police. We want the police in our neighborhoods, we support the police.' That'll help build the morale for our cops back up, which is so important."
EMBED More News Videos

N.J. Burkett talks to NYPD Chief of Department Terence Monahan about the spike in NYC crime and other topics

The NYPD's top cop was among seven officers injured during protests at City Hall Wednesday when they were hit with canes, bats, and debris.

Jim Dolan has more on the chaos that broke out between protesting groups in Lower Manhattan.

When asked who's attacking the police, Monahan said it's not a new group.

"It's the same people who have been attacking us since day one. These are people whose sole purpose is to get rid of government. It's not 'defund the police' it's 'abolish the police.' It is anarchists pure and simple."

He agreed that many of them seem to be based in the City Hall Park encampment, which he acknowledges has become increasingly volatile and dangerous, but Monahan said a decision to clear the park must be made by City Hall in order to do so peacefully.

"We were on the right path until COVID and these protests and it's really turned the city upside down. We can get it back. With the support of the people that we had prior, reaching out to their police officers let them know they support the actions that they do in their neighborhoods, city council standing up, supporting their police officers. That'll make a huge difference. It's starting to come around, but the hatred to police has got to end," Monahan said.