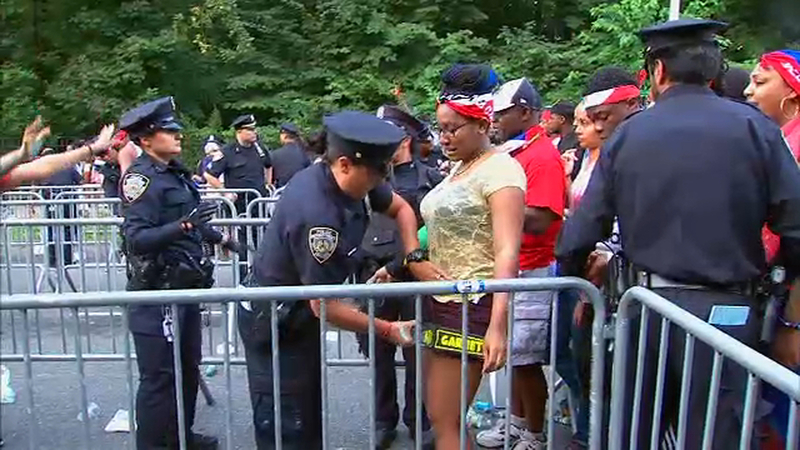 The city is adding an additional entry point to ease crowds entering festival in the early morning hours Monday. Participants line up at 2 a.m. to be screened at entry points for weapons and alcoholic beverages before being permitted to enter the route. The parade starts at 6 a.m., 25 minutes before sunrise.

One of the complaints last year were that the lines to enter for screening were too long, so there will be 13 secure entry points this year.

"We learned with last year's success that each of us has the ability to make J'Ouvert a safe and highly enjoyable event," NYPD Commissioner James O'Neill said. "Through the evolution of this passionate celebration of Caribbean culture, the NYPD has built trust and strengthened relationships with many of the stakeholders, and we know we're always stronger and more effective together."

Security for the 2018 parade will follow closely to last year's plan, ensuring the safest possible environment for attendees and participants to enjoy the event. The formation area and parade route will close to the general public on the previous evening, and hundreds of additional uniformed officers will provide security at the entry points and along the two-mile parade route.

Backpacks and other large bags will be prohibited, and the Mayor's Office to Prevent Gun Violence will also deploy violence interrupters and community partners who will circulate throughout the celebration in order to preempt and resolve any conflicts that may arise.

"J'Ouvert is one of the most vibrant cultural celebrations in our city, and we're working with the community to make the festivities are enjoyable for all," Mayor Bill de Blasio said. "In the safest big city in America, no one should have to choose between ensuring their safety and celebrating their heritage."

Hundreds of light towers will illuminate each entry point along the parade route to increase safety and facilitate the ease of entry, and police will also deploy additional high-resolution security cameras to monitor for any unsafe activity.

A unified team comprising J'Ouvert City International, the NYPD, clergy, community members, and elected officials are working together to ensure public safety at this year's celebration.

Despite the added security last year, there was at least one non-fatal shooting along the parade route on Eastern Parkway between Brooklyn Avenue and New York Avenue. Two people were killed in 2016, and in 2015, an aide to Gov. Andrew Cuomo named Carey Gabay was shot and killed.