Ceremonies honor NYPD detectives Ramos, Liu on one year anniversary of their deaths 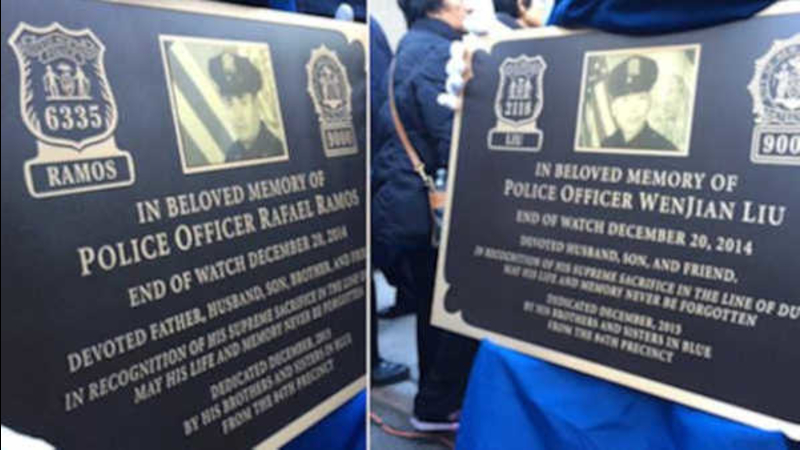 BEDFORD-STUYVESANT, Brooklyn (WABC) -- Police and city officials are paying tribute to two NYPD officers on the one-year anniversary of their deaths.

Detectives Rafael Ramos and Wenjian Liu were fatally shot while sitting in their patrol car in Bedford-Stuyvesant last December.

Mayor Bill de Blasio, Police Commissioner William Bratton and the officers' families gathered for the dedication of a plaque at the 84th Precinct, where the officers worked.

Liu's father, Wei Tang Liu, thanked everyone for their support in a ceremony attended by hundreds of officers.

He bent over in grief and sobbing as he spoke in Chinese about his only child.

Liu's wife, Sandy Liu, translated, breaking down as she spoke her father-in-law's words: "Before my son's death, I would hear his voice every day for the past 33 years of his life."

There was also a wreath-laying ceremony and a moment of silence at the scene of the shootings in Brooklyn.

Recently the widow of Detective Ramos, Maritza, annnounced that she is launching the Detective Rafael Ramos Foundation with the hope of bettering relations between police and minority communities.

Ramos and Liu were on duty in their marked patrol car in Bedford-Stuyvesant near Tompkins and Myrtle Avenues when both were shot in the head.