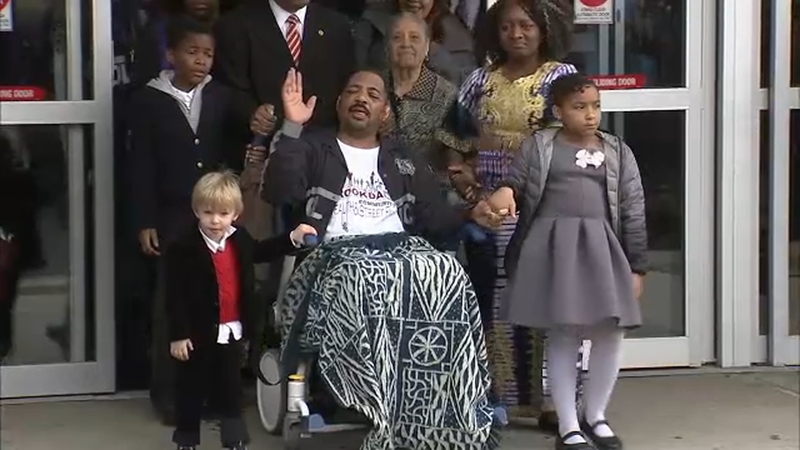 BROWNSVILLE, Brooklyn (WABC) -- The NYPD officer placed into a medically induced coma after a deadly police shooting in Brooklyn has been released from the hospital.

Hundreds of fellow officers and city officials were there to salute applaud him as he left the hospital surrounded by his family. His face and eye were visibly swollen, revealing the serious injuries he suffered last week.

On Friday, LaFontant and other officers were issuing a public urination summons to a man inside a nail salon when another man - 33-year-old Kwesi Ashun - confronted the officers.

LaFontant was hit in the head with a metal chair. Police say the officer shot the man because efforts to subdue him with a stun gun were unsuccessful.
Paramedics rushed LaFontant to the hospital in critical condition.

"It was real severe trauma to his face, broken bones around the eye and it affected his entire body," Chief Medical Officer Dr. David Rose said.

The decision was made to put the married father of four in a coma for 36 hours.

"He was on a ventilator, he was sedated and placed in a medically induced coma so that we could complete all the investigation we needed to complete," said Dr. Adebayo Esan.

As his condition improved, the decision was made to bring him out of the coma.

"He also still has very severe injuries, but he no longer needs an acute care hospital," Rose said.

Residents, community activists, elected officials and the family of Ashun planned to gather later Monday night for a vigil.

Eyewitness News has learned that Ashun suffered from mental health issues and his family was seeking help for him.

"They begged for help but the city is not giving the help, people deserve help but that doesn't mean it's the police officer's fault," PBA President Pat Lynch said. "The city didn't give the help and he bashed a police officer in the head."

Officer LaFontant is expected to make a full recovery with full support from his fellow officers.

"He has just a smile and such a positive attitude for someone 21 years on the job, he's just an inspiration for all of us," said commanding officer Capt. Craig Edelman.

The incident was the fourth fatal shooting by an NYPD officer in less than two weeks.
EMBED More News Videos

RAW VIDEO: NYPD Officer Lesly LaFontant, who was hit in the head with a chair during an incident in Brooklyn then placed in a medically induced coma, is greeted with thunderous app