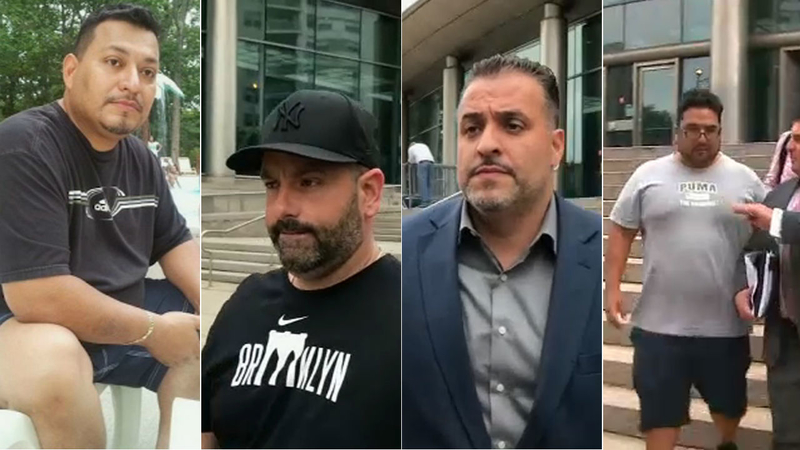 SUNSET PARK, Brooklyn (WABC) -- Seven members of the NYPD were arrested Wednesday in connection with a prostitution and gambling case as part of an investigation dating back to 2015.

The suspects -- three sergeants, two detectives and two officers -- were reportedly based in Queens and Brooklyn and were believed to be providing protection for the operation of the ring.

They, along with dozens of civilians who are also believed to be connected to the crimes, appeared in Queens Criminal Court on Thursday.
EMBED More News Videos

Candace McCowan reports on the arrests from outside the court.

"They ruined their own careers and reputations," NYPD Commissioner James O'Neill said. "But more importantly, they diminished the great work of tens of thousands of cops. That should make every cop angry."

At least two NYPD detectives were placed on modified duty as a result of the investigation.

Sources tell Eyewitness News the suspects have been identified as:

O'Neill released the following statement after the arrests:

"Today, those who swore an oath and then betrayed it have felt the consequences of that infidelity. The people of this Department are rightly held to the highest standard, and should they fail to meet it, the penalty will be swift and severe. I thank Deputy Commissioner Joseph Reznick for the thorough investigation performed by the Internal Affairs Bureau, in partnership with the Queens District Attorney's Office, in rooting out this illicit activity. His unit initiated this probe and in doing so, has sent a clear message: there is no place in the NYPD for criminal or unethical behavior."

Many of the women involved in the case appear to be from Central America.

The investigation dates to 2015, when NYPD Internal Affairs received a tip from a fellow officer. They then compiled hundreds of hours of surveillance and wiretaps, officials said. The officers will be prosecuted by the Queens District Attorney's Office.

According the charges, the head of these enterprises was Paz, a retired NYPD vice detective, who worked with his wife, Arelis Peralta, running the prostitution and gambling ring. Paz is alleged to have operated or was partnered with and assisted with the day to day business at seven out of eight brothels. The brothels are located on Liberty and Onderdonk avenues in Queens; on Gates, Foster and Fourth avenues and 42nd Street in Brooklyn, and the final location is on Front Street in Hempstead, Long Island.

District Attorney Richard Brown said Paz used his knowledge of NYPD Vice procedures to set up protocols for new prostitution clients. Knowing that detectives could not expose their genitals during their interactions with prostitutes, Paz required the new clients to undress and allow themselves to be fondled to pass the brothel's security screening. The retired detective also allegedly used his contacts within the NYPD to thwart raids by paying for confidential police information.

Furthermore, the prostitution ring is alleged to have taken in more than $2 million between August 2016 and September 2017. The brothels used online ads to attract customers, and after passing the screenings, clients would be allowed to choose a prostitute and paid anywhere from $40 for 15 minutes of sexual activity up to $160 for a full hour.

According to the indictments, Paz and Peralta are alleged to have profited from several illegal lottery businesses set up at a deli on Springfield Boulevard and within a beauty salon on 243rd Street, both in Queens, as well as at a beauty salon on Flatbush Avenue in Brooklyn, and other undisclosed locations. The operations included managers, runners and agents with working offices to place illegal bets on legal lotteries.

WATCH the NYPD's full news conference on the arrests