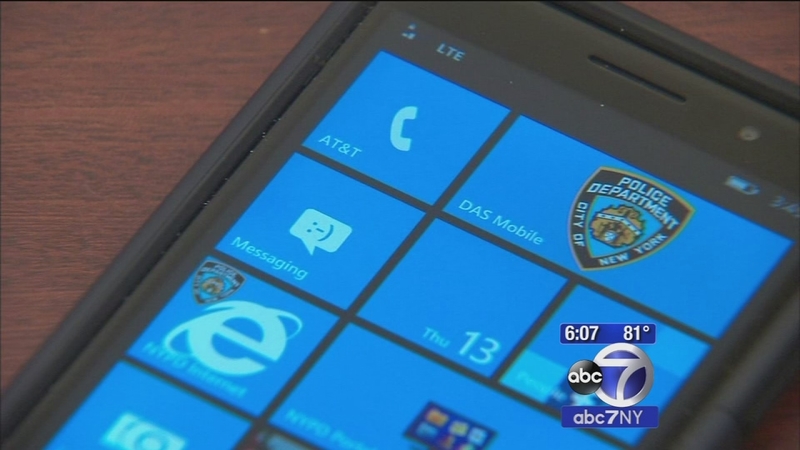 SOUNDVIEW (WABC) -- The call came in as an officer in pursuit, and in a matter of seconds, other officers from the 43rd Precinct began responding. From the NYPD's new smartphone technology, officers learned of a warrant for the suspect's arrest

One of the first to be trained, police officer Edwin Espinal embraces the new crime-fighting tool that will provide all 35,000 officers on the force with the NYPD's domain awareness system.

"It's a huge asset to the department. It gives us access to numerous department databases, as well as Department of Motor Vehicles - most importantly 911 calls," says Officer Espinal.

On August 5th, just minutes after getting their smartphones and their training, officers Espinal and Sergeant Robert Foley, with the precinct's anti-crime team, started watching the incoming 911 calls.

"I observed a fight on Westchester and Morrison just a couple of blocks away - there was a number attached to the 911 call," says Officer Espinal.

"Responding officers were able to go in that direction, and not only did they recover the weapon that was used in the crime, but also able to locate the perp," adds Officer Espinal.

The officers believe it took only five minutes from seeing the first 911 call on the phone, to the arrest of the suspect. Giving the officers immediate access to victims, they say, and not having to wait for radio contact speeds the work significantly.

"With the number right in front of you, make that phone call, dial that number, and you have the witness or that victim in the palm of your hand," said Sergeant Robert Foley.

It can also help an officer with translation if there is a language barrier. Working in real time saves the officers critical time.

Officer Espinal, a computer science major sees this as a huge push forward.

"This will increase the department's success in years to come," he says.