NYPD officer accused of spying, arrested for allegedly acting as agent of China 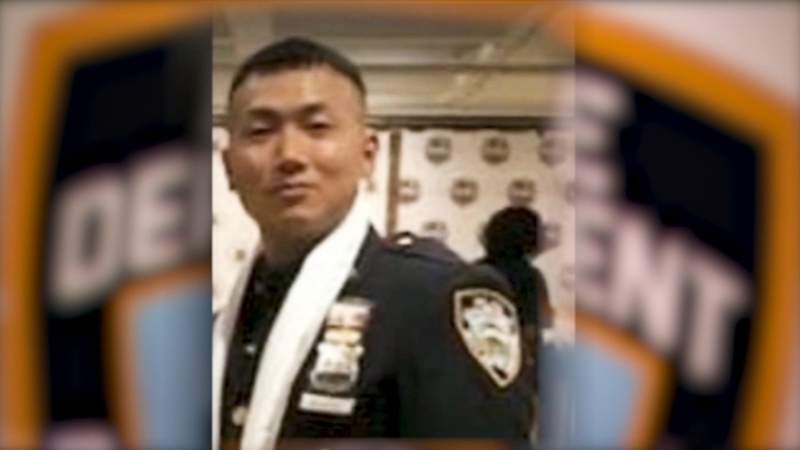 NEW YORK (WABC) -- NYPD officer Baimadajie Angwang, a community affairs officer in the 111 precinct in Queens and a US Army Reservist at Fort Dix, has been arrested for allegedly acting as an agent of China.

According to the criminal complaint, Angwang acted "at the direction and control" of Chinese government officials at the consulate in New York to report on the activities of ethnic Tibetans, assess potential ethnic Tibetan intelligence sources and use his official position at the police department to give consulate officials access to senior NYPD officials.

He is also accused of committing wire fraud, making false statements and obstructing an official proceeding.

"None of these activities falls within the scope of Angwang's official duties and responsibilities with either the NYPD or the USAR," the complaint said.

"Angwang also discussed the utility of developing sources for the PRC government in the local Tibetan community and suggested that the primary qualification for a source as follows: 'If you're willing to recognize the motherland, the motherland is willing to assist you with its resources,'" the complaint said.

Since prior to 2018 and through the present, officials say Angwang has maintained a relationship with at least two People's Republic of China officials stationed at the Consulate. One PRC official is believed to have been assigned to the "China Association for Preservation and Development of Tibetan Culture," a division of the PRC's United Front Work Department ("UFWD"). The department is responsible for, among other things, neutralizing sources of potential opposition to the policies and authority of the PRC.

Recorded conversations have revealed that the PRC officials has been a "handler" of Angwang. He received tasks from them and reported back to PRC officials.

Furthermore, Angwang has been observed entering the Consulate on numerous occasions during these time periods.

Angwang will make his first appearance this afternoon virtually in federal court in Downtown Brooklyn.

"As alleged in this federal complaint, Baimadajie Angwang violated every oath he took in this country," Shea said in a statement. "One to the United States, another to the U.S. Army, and a third to this Police Department. From the earliest stages of this investigation, the NYPD's Intelligence and Internal Affairs bureaus worked closely with the FBI's Counterintelligence Division to make sure this individual would be brought to justice."

"This is the definition of an insider threat - as alleged, Mr. Angwang operated on behalf of a foreign government; lied to gain his clearance, and used his position as an NYPD police officer to aid the Chinese government's subversive and illegal attempts to recruit intelligence sources. The FBI is committed to stopping hostile foreign governments from infiltrating our institutions, and we will not tolerate the behavior of those who willingly violate their oath to the United States, and covertly work against their fellow citizens. We want to thank the NYPD for its extraordinary partnership on this investigation."

In 2018, the NYPD awarded Angwang "Officer of the Month" for his initiative and public service.