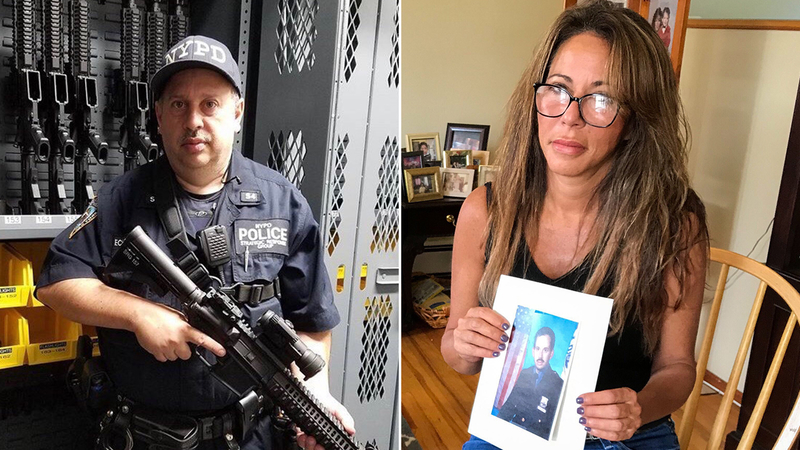 Sister of officer who died by suicide says NYPD is 'broken'

NEW YORK (WABC) -- On duty, New York City police officers must always prepare for life-threatening violence, but annually, more officer lives are claimed by suicide, according to the Associated Press.

The NYPD is well aware of this mental health emergency, as nine of its officers have died by suicide since January. But Eileen Echeverria, whose brother's was the most recent death, said something is "broken" inside the department.

"I begged them to help my brother. Not once, not twice, half a dozen times at least ... It's an epic failure. And this is not the last one. I hope to God it is," she said.

NYPD officer Bobby Echeverria died of a self-inflicted gunshot wound at his home in Queens on Wednesday. Eileen's brother, who worked in the department for 25 years, left behind a wife and two children.

His was the second NYPD suicide within a week, and the seventh since June.

That was in June. Eileen said the department's Internal Affairs had seized -- and returned -- Officer Echeverria's weapons twice before, after episodes several years ago. When she appealed for help this time, she said Internal Affairs investigated, but took no action.

"'My conversation, I'll never forget: 'You'll know that when my brother kills himself, that you did this.' I said that to the Lieutenant. And he said, 'Have a nice day, ma'am,'" she said.

Eileen said she called the NYPD's psychiatrist the day after her 56-year-old brother's death and asked if she remembered having conversations with her about his mental health.

The recent suicides have driven a discussion about the psychological toll of police work, a profession in which discussing mental health was long seen as taboo.

John Violanti, a University of Buffalo professor and expert on police stress, said officers might be less likely to seek mental health treatment than the average person because of the nature of their job.

"The essence of the police culture is that you don't ever show weakness," he said. "That bleeds over into your personality, and cops develop this sort of hard shell."

Eileen said the NYPD needs to reassure officers who would seek out, as her brother feared the repercussions of seeing a therapist.

"That's all my brother said, 'I can't lose my job. They're gonna put me on desk duty. I'm not gonna get overtime. I have to get the overtime. I can't survive on this.' It's all I ever heard," she said.

Yet the deaths have come despite the department's mounting efforts to encourage officers to seek help for depression and other mental health problems.

After two officers killed themselves on back-to-back days in June, Police Commissioner James O'Neill sent a note reminding the more than 36,000 officers and 19,000 civilians in the NYPD that help is available if they're feeling depressed, hopeless or contemplating self-harm.

"It's extraordinarily painful," Mayor Bill de Blasio said Thursday. "We have lost officers in the past, but this concentration is devastating. We're going to do everything conceivable to help officers and to stop this."

But Eileen said that the mayor and commissioner are "pretending" to care.

"If they cared, my brother would be here ... And the reason I'm doing this is because I'm praying and hoping the mayor, the commissioner see this and say, 'Let's do something. Let's have counselors here,'" she said.