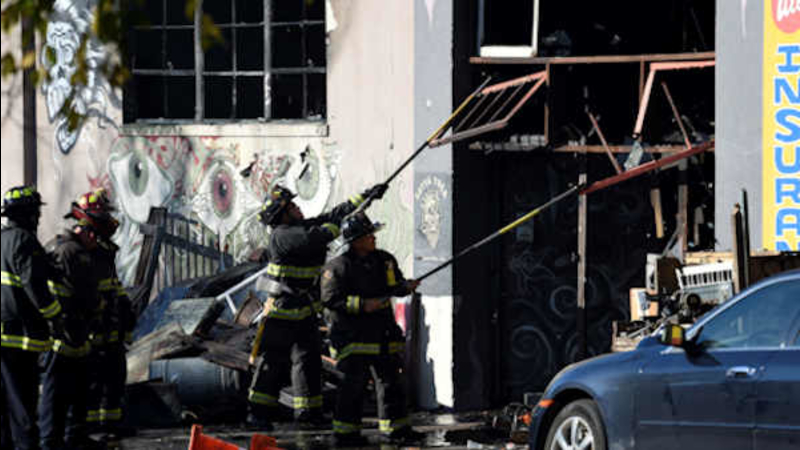 OAKLAND, California -- The death toll from a fire that tore through a warehouse hosting a late-night dance party climbed to 33 on Sunday as firefighters painstakingly combed through rubble for others believed to still be missing and made the grim announcement that teenagers were among the dead.

RELATED: More on the victims of the Oakland warehouse fire.

The building that went up in flames was known as the "Ghost Ship," had been carved into artist studios and was an illegal home for a rotating cast of a dozen or more people, according to former denizens who said it was a cluttered death trap with few exits, piles of wood and a mess of snaking electric cords.

"If you were going there for a party, you wouldn't be aware of the maze that you have to go through to get out," said Danielle Boudreaux, a former friend of the couple who ran the warehouse.

The death toll was expected to rise, as crews using buckets and shovels slowly made their way through the building, finding victims where they least expected them, Alameda County Sheriff's Sgt. Ray Kelly said.

Less than half of the charred remains of the partly collapsed structure had been searched as of Sunday afternoon, Kelly said.

"When we started this investigation, if you had told us that you would have 33 victims, we wouldn't have believed you," Kelly said. "I don't know how many people are left in there."

The victims include 17-year-olds and people from Europe and Asia and range in age from their teens to 30-plus years old, Kelly said. Officials have identified eight people who were killed - at least seven of them using fingerprints.

Anxious family members who feared the worst gathered at the sheriff's office to await word on their loved ones. They were told they may have to provide DNA samples to help identify remains.

As many as 100 people were there for a party Friday night when the fire broke out just before midnight. Fire officials were still investigating the cause of the blaze, but they said clutter fueled the flames, there were no sprinklers inside and few exits to escape.

Boudreaux identified the operators of the Satya Yuga collective as Derick Ion Almena and Micah Allison. She had a falling out with Almena when she convinced Allison's parents and sister about a year ago that the warehouse was a dangerous place for the couple's three children to live.

Michael Allison of Portland, Oregon, the father of Almena's partner, Micah Allison, said the couple had a troubled relationship. Michael Allison and other family members were able to persuade his daughter, Micah, to go to a drug rehabilitation center in 2015, but Almena talked his way into the rehab center, and convinced Micah Allison to leave with him, Michael Allison said.

The family's three children had lice and needed new clothes, prompting family to call child-protective services, said Michael Allison, who wept as he talked. But Almena and his partner eventually were able to win custody of the children back and cut off all communication with Michael Allison, the father said.

"Whenever I could, I would to talk to (Micah Allison) to get away from him because I knew he was dangerous from day one," he said. "All of that has now been proven."

Almena did not immediately respond to emails or phone numbers associated with him. Authorities declined to talk about the manager, saying they were focused on recovering the bodies and consoling families.

No one answered a call to a number for Micah Allison.

A man identified as Derick Ion posted a Facebook message early Saturday, saying, "Everything I worked so hard for is gone. Blessed that my children and Micah were at a hotel safe and sound." He drew rebukes online from others who said he was warned the building was unsafe.

The couple rented out five recreational vehicles and other nooks on the ground floor as living spaces. A rickety makeshift staircase led to a second floor where concerts were held. Former residents said there frequently was no electricity or running water.

Oakland planning officials opened an investigation last month after repeated complaints from neighbors who said trash was piling up and people were illegally living in the building zoned as a warehouse. An inspector who went to the premises couldn't get inside, said Darin Ranelletti, of the Oakland Planning Department.

The city had not confirmed people lived there, but a former resident, Shelley Mack, said she had been lured in part by reasonable rents in a region beset with a housing shortage and exorbitant leases driven by the tech boom.

To a first-time visitor, the labyrinth of uniquely designed spaces was "stunning," said Alastair Boone, a University of California, Berkeley student who arrived at the party with five friends around 11 p.m.

Boone said she had just received a tour of the property and stepped outside when someone yelled, "Fire!"

"In a couple of minutes there were flames coming out of the windows and black smoke was just billowing out of the house," she said.

Some of the people who got out were crying and others stood silently in shock as firefighters arrived to put the flames out.

Online records listed the building's owner as Nar Siu Chor. The Associated Press could not locate a telephone number for her Saturday. Efforts to reach her at other Oakland addresses associated with her were not successful.


Click here to donate and help the the families of the victims.

The Oakland A's professional baseball team also created a fund for victims and said they are matching donations of up to $30,000.