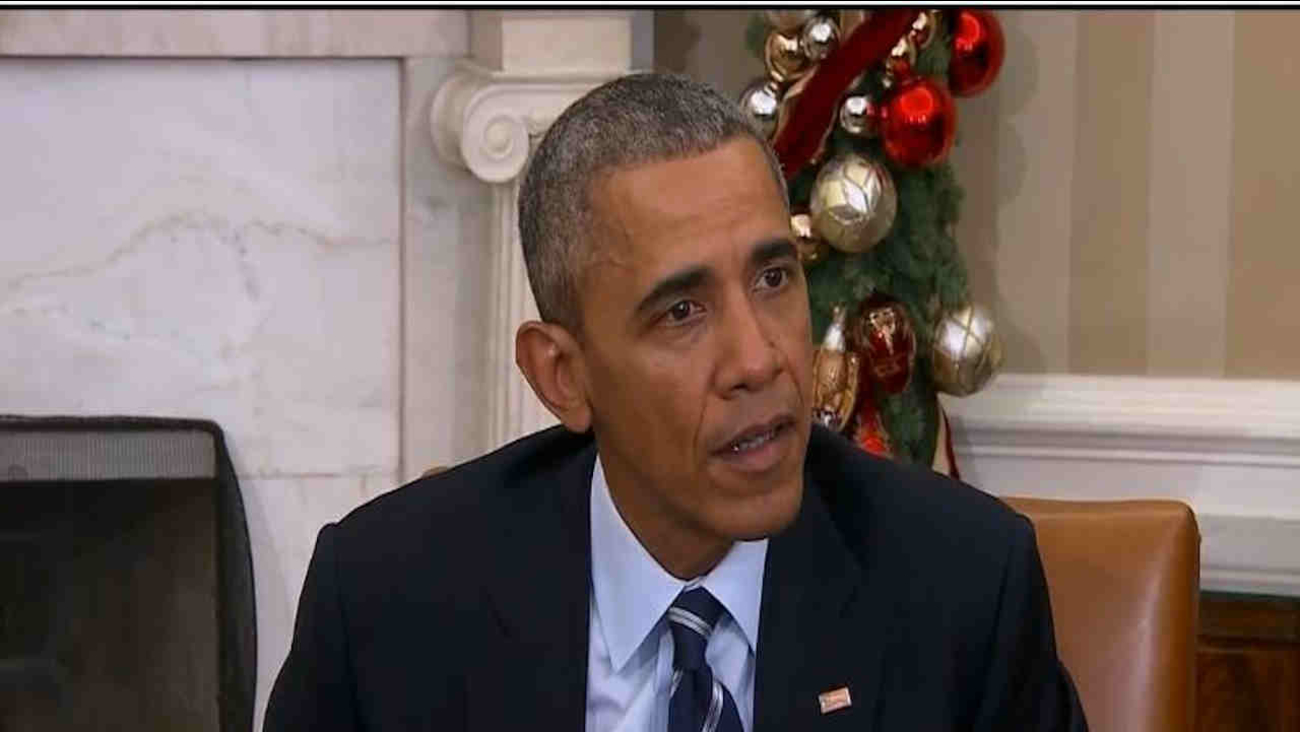 WASHINGTON -- President Barack Obama said Thursday investigators are continuing to search for the motives of the people who killed 14 people in a spray of bullets in California and called on Americans to "search ourselves as a society" to find a way to curb gun violence.

Speaking to journalists in the Oval Office, Obama said there may have been "mixed motives" behind the shooting, a factor that is complicating the investigation.

"It is possible that this was terrorist-related, but we don't know. It's also possible this was workplace-related," Obama said after a meeting with his national security team. Obama said the suspects in the Wednesday shooting were equipped with weapons at the time they were killed by police and appeared to have access to more at home.

"We don't know why they did it. We don't know at this point the extent of their plans," Obama said, warning against passing judgment before conclusions are drawn.

Obama repeated his case for new gun control measures - a call he's promised to issue after every mass shooting - although he did not lay out specific proposals or criticize the Republican-led Congress for blocking tighter controls, as he often does.

Speaking softly, a subdued Obama said too often Americans feel there's nothing they can do to prevent this kind of violence.

"We all have a part to play. As the investigation moves forward, it's going to be important for all of us, including our legislatures, to see what we can do to make sure that when an individual decides they want to do somebody harm, we make it a little harder for them to do it. Right now, it's just too easy.

"We're going to have to, I think, search ourselves as a society," he said.

Obama ordered U.S. flags at the White House and other government buildings to be flown at half-staff through Monday to honor the victims of the shootings, and while he recognized that many Americans feel there's nothing they can do about mass violence, he said, "We all have a part to play."

Obama says the nation must make it harder to carry out violence. But he's acknowledging the threat can't be eliminated completely. He says it will be important for all Americans, including state legislators, to see what they can do.

He also ordered that "as a mark of respect for the victims of gun violence" in San Bernardino, all United States flags be flown at half-staff at the White House and upon all government buildings through Dec. 7.
Related topics:
politicspresident barack obamasan bernardino mass shootingnationalu.s. & world
Copyright © 2022 by The Associated Press. All Rights Reserved.
TOP STORIES
Man recovering after being shoved onto subway tracks
Teen shot in back of head among 3 injured in Brooklyn shooting
AccuWeather: Partly sunny
5 tax changes that can boost your refund this year
Candlelight vigil held for NYPD officer killed in Harlem shooting
7th grader fentanyl overdose death sparks debate for Narcan in school
Rescuers use sausage dangling from drone to lure runaway dog to safety
Show More
Fat Joe holds fundraiser for Bronx fire victims
After the omicron wave, what's next for the COVID pandemic?
Sen. Kyrsten Sinema formally censured by Arizona Democratic Party
Tax filing season starts Monday. What to expect for 2022
COVID Updates: FDA considers limiting monoclonal antibody treatments
More TOP STORIES News