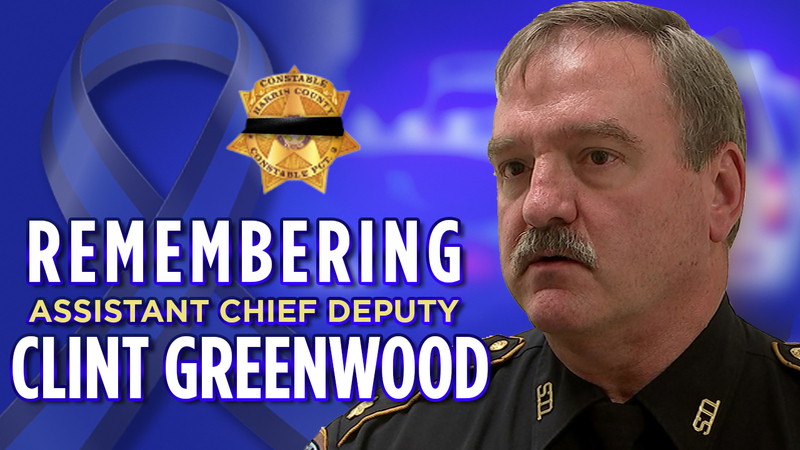 Greenwood had a 30-year career in law enforcement, much of it involved in police misconduct and internal affairs investigations. Prior to working at the Pct. 3 Constable's Office, Greenwood worked in Internal Affairs at the Harris County Sheriff's Office. Earlier, he worked in the Harris County District Attorney's Office.

Did those high-profile stints targeting corruption and misconduct play a role in Monday morning's brutal ambush? Multiple sources tell Eyewitness News investigators are looking into it.

For now, Houston Crime Stoppers, the FBI, the Office of the Governor's Criminal Justice Division and a concerned citizen are offering a combined reward of $65,000 for information leading to the identification and arrest of the person or persons involved in Greenwood's murder.


The incident began around 7:05 a.m. Monday when someone fired and hit Deputy Greenwood in the neck as he was arriving for work at the Baytown courthouse complex. Nearby residents heard the shots.

"It was loud," said Charlie Frazier, who was getting ready for school when the shots rang out. "It was really scary because it didn't sound like gunshots at first. It was a total of four shots and a brief pause in between two of them."

VIDEO: Miya Shay reports from the scene of the courthouse where Greenwood was shot
EMBED More News Videos

Miya Shay reports from the scene of the courthouse where Harris County Asst. Chief Deputy was killed.

Soon, her grandparents saw investigators and K-9 teams walking through their backyard, looking for possible suspects.

"They had the dogs way back there in the wooded area right there, and it was just chaotic," said Frank Chapa, whose property backs up near the courthouse complex.

Authorities told reporter Jeff Ehling the shooting happened at the back of the courthouse. Investigators said Greenwood was shot in the neck and radioed for help, reportedly saying "I'm bleeding out."

Officials give update on fatal shooting of deputy constable

Another deputy nearby rushed to his aid, applying pressure to Greenwood's neck. He was flown via Life Flight to Memorial Hermann Hospital, where he died of his injuries.

For hours, investigators combed through the blood-stained SUV driven by Greenwood. A police radio covered in blood was visible in the dashboard. Bullets had shattered the windows.

Investigators confirm to Eyewitness News that several sources of surveillance video have been gathered. The video apparently shows a dark-colored car driving away from the scene. There is also apparently video that shows a possible suspect walking around the area.

Investigators are still deciding whether to release the video to the public. For now, detectives from several law enforcement agencies are working on several different leads. There have been no arrests.