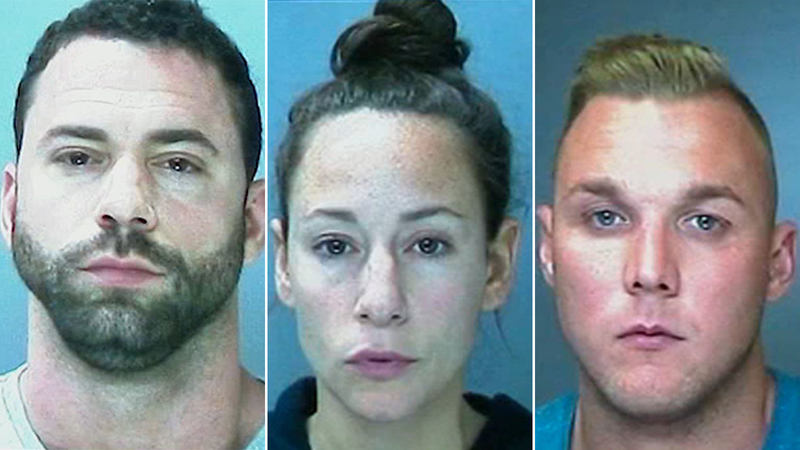 PORT JEFFERSON STATION, Suffolk County (WABC) -- A drug bust led to the arrest of three Nassau County police officers, two for their alleged involvement in a drug ring and the third for allegedly conspiring to rob a patron of a local casino and an armored casino truck.

Prosecutors said Caceres had been operating a drug ring since 2016 in which he would have pot and other narcotics delivered to co-conspirators who would then deliver the drugs to Caceres. Eight other people were named as operators in Caceres' alleged drug ring.

"Daniel Caceres billed himself as a one-stop shop for various illicit substances, including marijuana, cocaine, and Alprazolam, or Xanax," Sini said. "He is also a gym junkie and a supplier of steroids, which is how he came into contact with several of the defendants in this indictment."

During the course of the investigation into Caceres' alleged drug ring, authorities found allegedly incriminating information about another Nassau County police officer.

Officer Bruce Moeller is facing charges for allegedly conspiring with Caceres to rob a high-roller patron at Jake's 58 casino in Islandia in May.

Prosecutors said Moeller's wife Christina Moeller worked at the casino and informed Moeller when a high-roller patron came back to the casino the day after making $75,000 in winnings.

Bruce Moeller and Caceres came to the casino with weapons, according to prosecutors, in order to rob the patron. The alleged plan never came to fruition.

Investigators said the Moellers also planned to rob an armored casino vehicle, and Bruce Moeller can be seen on surveillance video canvasing the area where the truck parks.

"This was simply a case of taking the investigation wherever it led," said Suffolk County Police Commissioner Geraldine Hart.

Nassau police said all three officers have been suspended without pay.