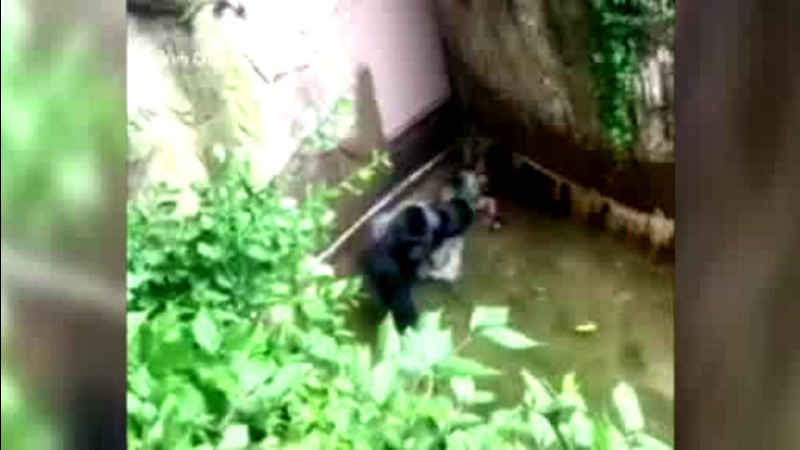 No charges for parents in gorilla killing case in Ohio

CINCINNATI, Ohio -- A prosecutor Monday announced no charges will be brought against the mother of the little boy who got into the gorilla exhibit at the Cincinnati Zoo, saying the 3-year-old "just scampered off" as children sometimes do.

The shooting of a 400-pound gorilla that was dragging the child through a moat May 28 set off a torrent of criticism online, with some attacking the zoo for the animal's death and others blaming the mother for not watching her child more closely.

Hamilton County Prosecutor Joe Deters said the case didn't come close to warranting a charge of child endangerment, and he defended the mother as an attentive parent undeserving of the sharp criticism and threats.

He said the mother had three other children with her at the zoo and had turned away "for a few seconds" to attend to one when the boy took off.

"If anyone doesn't believe a 3-year-old can scamper off very quickly, they've never had kids. Because they can. And they do," Deters said.

In a statement, the family said it was pleased with the decision.

"This is one more step in allowing us to put this tragic episode behind us and return to our normal family," the statement said.

The boy apparently climbed over a 3-foot barrier, made his way through bushes and fell 15 feet into a shallow moat. The zoo's dangerous-animal response team shot the agitated, 17-year-old gorilla, Harambe, after concluding the boy's life was in danger.

The zoo plans to reopen its Gorilla World on Tuesday with a higher, reinforced barrier. Deters said he was glad to see the improvements.

The zoo's actions will be reviewed separately by the U.S. Department of Agriculture. An animal protection group has urged that the zoo be fined.

The zoo had no immediate comment on the prosecutor's announcement.

Legal experts had said all along that child-endangerment charges were unlikely under such circumstances. Echoing those experts, Deters said there was no evidence the mother heedlessly put her child in danger, as prosecutors who have had to show.

"If she had been in the bathroom smoking crack, that would be a different story. But that's not what happened here," the prosecutor said.

The prosecutor said the mother was there with her four children, ranging in age from 1 to 7, and was also with a friend with her own two sons.

Deters said he has been "a bit taken aback" by the reaction to the gorilla's death. He said the zoo suffered a great loss, "but it is still animal. It does not equate with human life. And they felt that this boy's life was in jeopardy and they made the painful choice to do what they did."

Cincinnati police said some of the online posts contained threatening language such as "shoot the mother." Family spokeswoman Gail Myers said they "are taking appropriate precautions."

The zoo has said that there had been no previous breaches in Gorilla World's 38-year history and that the barrier had passed repeated inspections by the Association of Zoos and Aquariums, which accredits zoos.

Zoo spokeswoman Michelle Curley said the barrier will now be 42 inches high - a half-foot taller than before - with solid wood beams on top and at the bottom, plus knotted rope netting at the bottom.

A Cincinnati police report identified the boy's mother as Michelle Gregg, 32, who works at a preschool near Cincinnati. The child's father isn't named in the report, and it was not clear whether he was at the zoo that day.

The boy's family has said he is doing well. He was treated at a hospital and released the evening of the incident. Police said he had scrapes on his head and knee, but was alert and talking when rescued, despite the fall into the moat.