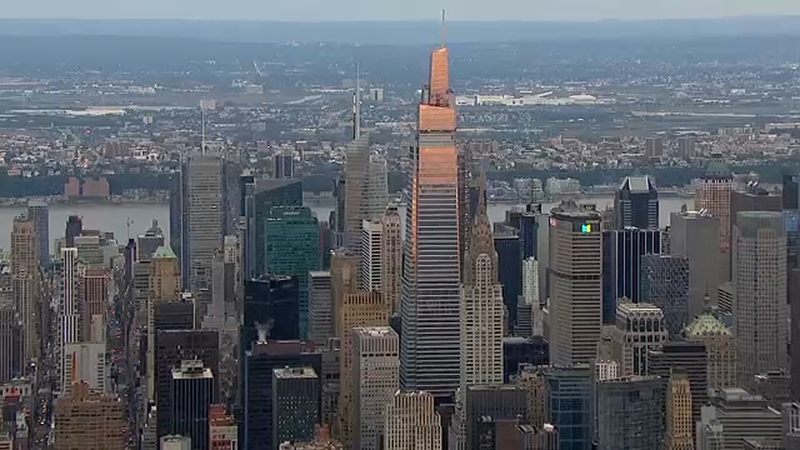 Among its many advancements, the building will interconnect with Grand Central Terminal to provide access to Metro North, the subway and in the future, LIRR -- as part of the East Side Access project.

The mayor's advisory says the ribbon cutting is "to celebrate that New York City is open and returning to work" -- just days after 163 top business leaders wrote the mayor, urging him to address "public safety, cleanliness and other quality-of-life issues" that would make people more confident to return to work. The mayor's office said Monday's ribbon cutting was planned weeks before receipt of the letter

Officials say the KPF-designed building, featuring unparalleled amenities and direct access to Grand Central Terminal, is already 60% leased, $100 million under budget and more than three months ahead of construction schedule with an expected opening in August 2020.

"As One Vanderbilt reaches its full height, its slender, crystalline profile assumes a prominent place on the New York skyline," says James von Klemperer, President and Design Principal at KPF. "The same angled geometries translate to the base of the tower, gesturing with generosity the great landmark of Grand Central Terminal. KPF is proud to have contributed to the tower's design, which arose from the collaborative efforts of our studio, SL Green, Hines, and the NYC Department of City Planning."

Building Information
When completed, One Vanderbilt will feature over twenty-six thousand tons of US made and fabricated steel and seventy-four thousand cubic yards of concrete. At its peak activity levels, over 800 workers are onsite daily as they work to complete the project. In addition, the project has engaged close to fifty subcontractors.

Public Improvements
SL Green's unprecedented $220 million private investment to improve Grand Central's public transit infrastructure has already materialized with new, widened staircases between the mezzanine and platform levels of the 4, 5, and 6 subway lines. Other planned transit investments include a transit hall linking Grand Central Terminal to the Long Island Rail Road station as part of the East Side Access project, enhanced connections to Metro-North and the shuttle to Times Square, and two new street-level subway entrances. The tower will also contain a 4,000-square-foot public transit hall for commuters in the building's northeast corner and an adjacent 14,000-square-foot pedestrian plaza on Vanderbilt Avenue between East 42nd and 43rd Streets.

Design
One Vanderbilt comprises four interlocking and tapering planes that spiral toward the sky. At the tower's base, a series of angled cuts on the south side of the block creates a visual procession to Grand Central Terminal revealing the Vanderbilt corner of the Terminal's magnificent cornice - a view that has been obstructed for nearly a century. The tower's terracotta facade, which incorporates the same distinct ceiling tiles found throughout Grand Central Terminal, provides the soaring structure a natural, luminous texture. The American Institute of Architects (AIA) recognized One Vanderbilt and its architecture firm, Kohn Pedersen Fox (KPF) Associates, with the prestigious 2018 AIA NY Merit Award in Urban Design.