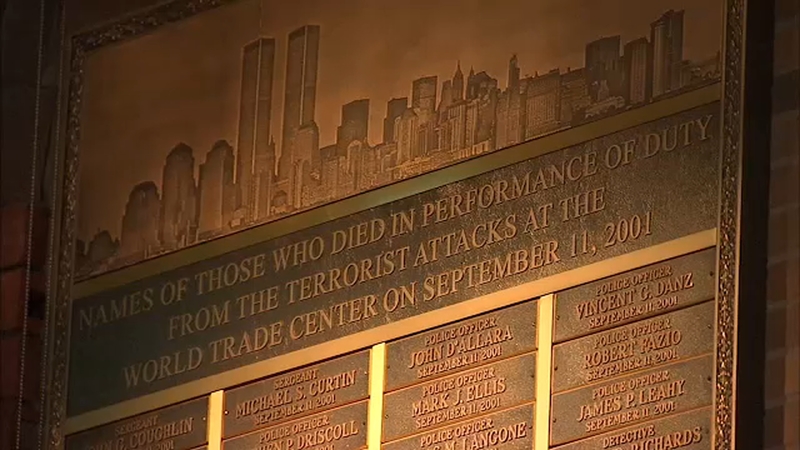 NEW YORK (WABC) -- Nearly 18 years after 23 NYPD officers died in the collapse of the World Trade Center, 9/11 remains the single biggest killer of officers in the nation's largest police force.

Last year, 15 officers died of cancer and other illnesses contracted during their service on or immediately after September 11th.

On Friday, their names and the names of 32 other officers who died in recent years from 9/11-related illnesses were added to the memorial at police headquarters. It's part of Peace Officers Memorial Day.

"Those we honor today paid a price for their heroism that day and that price was a horrible illness," Mayor Bill de Blasio said. "Each of them lived with dignity and strength and embodied the NYPD's motto 'Faithful until death.'"

In an op-Ed published exclusively by ABC News, New York City Police Commissioner James O'Neill urged Congress to replenish the 9/11 Victims Compensation Fund "for as long as it takes and as much as it costs" to help first responders and their families.

The fund is straining under the unexpectedly high number of claims and is scheduled to shut down in 2020. Without an infusion of money, the fund's special master said many claims would be reduced or denied.

It's a circumstance O'Neill founds unacceptable.

"We cannot desert the remaining claimants," O'Neill wrote in the opinion piece.

"The time has come to recognize that we cannot place a financial cap or temporal limit on this slow-moving human crisis," O'Neill wrote. "We must recognize that our estimates of the damage done were too low in both 2010 and 2015, and that the current plan to close out the fund by December 2020 is unrealistic."

O'Neill said the tragedy of 9/11 has "not ended for us or for our great city."