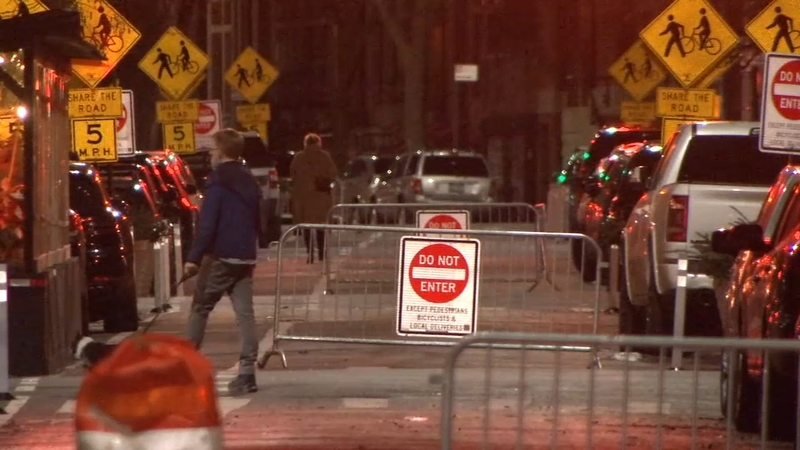 CLINTON HILL, Brooklyn (WABC) -- Within a blink of an eye, a beloved Open Street in Brooklyn was closed, but not to cars. It raised so many complaints that it is open again to pedestrians only.

It was seen as a model of community engagement and for remaking the streetscape in brownstone Brooklyn.

Just months ago, the Department of Transportation proudly advertised a new, permanent, so-called Open Street on Willoughby Avenue in Fort Greene/Clinton Hill, closing it to traffic 24/7, and ceding valuable pavement to bikes and dog walkers, and a neighborhood.

At Rhodora Wine Bar, it's been a dream come true.

"Without the street being closed off we wouldn't have survived the last two years," said Anita Brathwaite of Rhodora Wine Bar.

Except on Thursday, with no warning, city crews came and took it apart.

"And today we came out here and it was just all gone. Every trace of it," neighborhood resident Jason Rabinowitz said.

Gone were the barricades, the planters, the do not enter signs and a sense of progress people here say they fought for.

"There was a lot of community organization to get this in place. It took months and really years to get this permanent, make it a staple of the neighborhood -- it's just wrong to snap your fingers and make it disappear not even overnight," Rabinowitz said.

After an outcry on social media, it wasn't long before the Department of Transportation backtracked.

Barriers were temporarily moved, the agency tweeted, due to a miscommunication.

Barriers were temporarily moved from the Willoughby Open Street due to a miscommunication. We will restore the Open Street barriers this evening.

And before long, the barricades were back. But not the betrayal.

"If you're gonna change something you say, 'oh effective March 1st the streets are gonna be open to cars,' you don't just do without notice and just move everything and not tell everybody," Brathwaite said.

There have been complaints that the barricades are too noisy when moved at night, and that they slow down emergency vehicles and make it harder to park.

But the Department of Transportation won't say why, or at whose order, they dismantled the Open Street. And now that the barriers are back, the question still remains whether or not they're back for good.