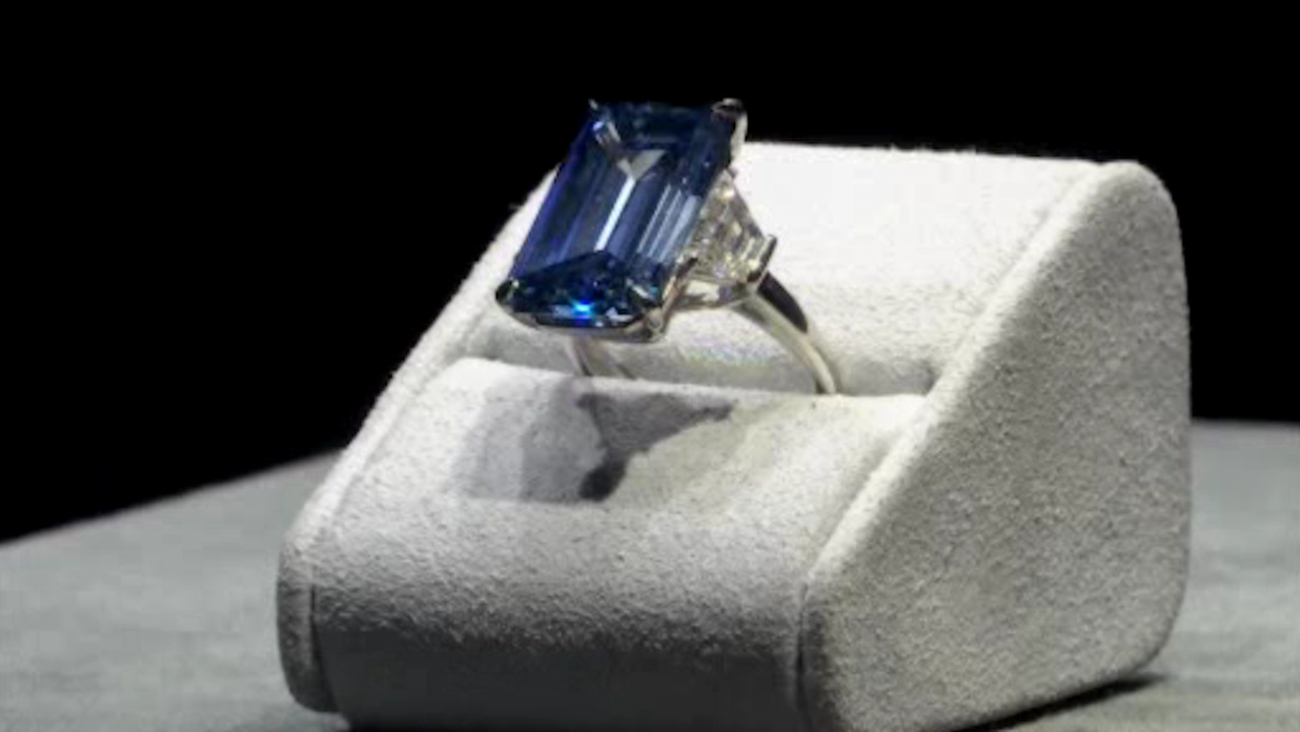 WABC
GENEVA -- The "Oppenheimer Blue" diamond sold Wednesday for more than 56.8 million Swiss francs ($57.6 million) including fees, crushing the previous record for the most expensive diamond ever sold at auction.

Capping a lively and even laughter-filled auction at Christie's, the hammer came down to applause as the 14.62-carat stone, billed as the largest Vivid Blue diamond ever put up for auction, went to an unidentified buyer for a hammer price of 50.6 million Swiss francs - which excluded fees and the buyer's premium.

That obliterated the pre-sale estimate range of between 38 million and 45 million francs.

The final tally also blew away the previous record for a diamond sold at auction by nearly $10 million: The 12.03-carat polished "Blue Moon" diamond went for $48.5 million in Geneva in November.

Christie's spokeswoman Alexandra Kindermann said the bidding for the "Oppenheimer Blue" lasted over 25 minutes for the single lot, after starting at 30 million francs. The anticipation was often marked with tense pauses, groans and laughter.

The rectangular-cut diamond has been set in a ring and flanked by two smaller trapezoid-shaped diamonds. The stone got its name from the late Sir Philip Oppenheimer, who long oversaw De Beers mining and had given the stone to his wife.

Oppenheimer, who died in 1995 at age 83, helped De Beers gain control of the world diamond market by convincing the Soviet Union to let him market its gems. He started his career with the diamond-mining giant in 1933 as a diamond sorter and trainee salesman.

In diamond-business parlance, "provenance" matters. Raymond Sancroft-Baker, Christie's director of European jewelry, said Oppenheimer "had the pick of all diamonds over a 50-year period, and this is what he picked out for his wife."

"There's been several other blue diamonds which have been sold in the past, but nothing really quite of this quality," Sancroft-Baker said, adding that while the stone wasn't internally flawless, it was "nearly perfect."

The sale rounded out a two-day run of big-ticket jewelry auctions in Geneva. At Sotheby's on Tuesday, a vivid, pearl-shaped pink diamond said to be the largest of its kind to go under the hammer sold for 27.3 million Swiss francs ($28 million) - at the low end of the pre-sale estimated price range.
Related topics:
auction
Copyright © 2022 by The Associated Press. All Rights Reserved.
TOP STORIES
Suspect paced Q train before fatally shooting man unprovoked: police
3 people killed in crash near catering hall on Long Island
Body of teen who disappeared while swimming in NJ reservoir found
Something strange is happening with our universe: NASA
AccuWeather: Cooler start to the week
Buffalo mass shooting victims laid to rest one week after tragedy
Israeli flags fill Upper East Side for 'Celebrate Israel' Parade
Show More
78,000 pounds of infant formula arrives in US
NJ police impose curfew after large party gets out of hand
Suspect breaks into NYC apartment, stabs man to death
Empire State Building lit to honor Notorious B.I.G.'s 50th birthday
Fate of 2,500 Ukrainian POWs from steel plant stirs concern
More TOP STORIES News