A 17-year-old boy who allegedly threatened a student with a knife then struck another student with his car while fleeing, school officials said. Marcus Solis has the story.

OSSINING, Westchester County (WABC) -- A 17-year-old boy who allegedly threatened a student with a knife then struck another student with his car while fleeing, school officials and police said.

District officials said a school security officer was monitoring the exterior of the school around 10:15 a.m. and witnessed a disturbance.

During the incident, officials said the 17-year-old from a neighboring community displayed a knife while seeming to threaten a student.

Eyewitness News has obtained a photo from incident. 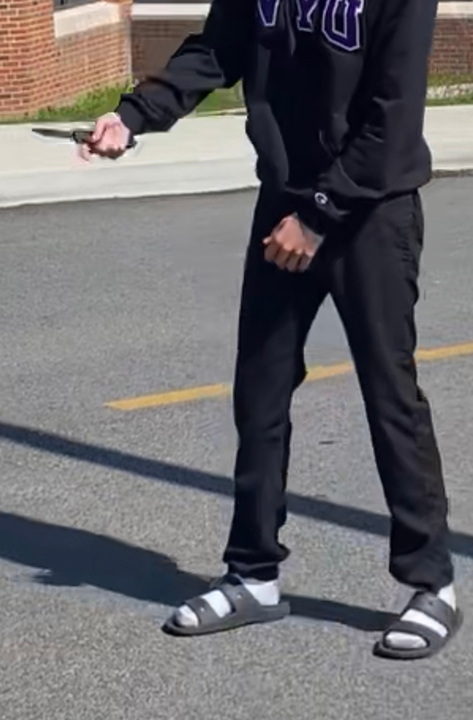 Police were called to the scene, and the individual reportedly took off in his car.

While fleeing, officials said he struck another student with his car.

That victim was treated for minor injuries. The student who was initially targeted was shaken up but not injured.

The school sheltered in place as a result, though officials said the suspect never attempted to enter the building.

They believe it to be an isolated incident and that the suspect and initial victim were known to each other.

Sources say the dispute was over a girl and that the knife wielding suspect, who is from Sleepy Hollow, is not a student in the district.

The suspect was located a short time later in Sleepy Hollow and was taken into custody. He will be charged as a juvenile.

Notifications went out to parents, and the rest of the school day proceeded normally.

"Earlier today, we responded to a call for service at Ossining High School," Ossining police said in a statement. "It was a potentially dangerous situation that was quickly resolved thanks to diligent staff members monitoring the school, quick response from patrol, and thorough investigation by detectives. A community can only be made safe through partnerships and our schools do an outstanding job of teaming with us to ensure everyone stays safe."