Watch "Our America: Who I'm Meant To Be" on your local ABC station or wherever you stream: Fire TV, Android TV, Apple TV and Roku
WABC
By Jose Mayorquin 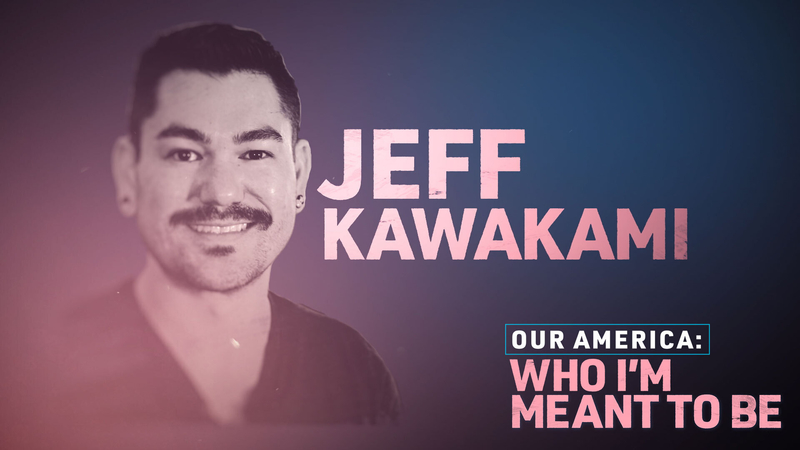 HOLLYWOOD, Calif. -- Jeff Kawakami is a personal chef in Hollywood. He is biracial and gay. His father is Japanese-American, born in an internment camp during World War II, while his mother's family is white and from the Midwest. Kawakami struggles with his identity and "passing" as white while also being proud of his Asian-American roots. He celebrates being proud of himself through the food he makes.

"I have always loved food, ever since I was a little kid. My mom cooked, and then my grandmother owned a diner," said Kawakami. "I feel like that means there's something about cooking in my blood."

Kawakami came out to his family when he was 17. Although his mother was supportive, it was still not an easy process for him.

"Being gay is very personal and it's hard," said Kawakami. "Parents, they think that they can somehow protect you by knowing everything about you, but you need time. I needed time to be OK with being gay."

"Growing up in the 90s, it's something that you hid. It was very shameful," said Kawakami. "I grew up very much with the notion of, 'You're gay. You're going to get AIDS. You're gonna die.' The younger generation doesn't have the same shame and fear that my generation grew up with."

"Sometimes I feel like I'm lucky, because living in Los Angeles I'm in this like bubble -- this nice, safe bubble. I know it's not like that all over," added Kawakami. "My family is in Missouri, and there are places in Missouri where I don't necessarily feel comfortable being by myself. And now people are beating up Asians, and it's frightening."

Kawakami has also experienced racism within the LGBTQIA+ community, particularly when it comes to dating.

"There are 100 percent still stereotypes about Asian men," said Kawakami. "Everybody just assumes that you're feminine, that I'm going to be this petite person, and it's just weird to me. Either 'you're not attracted to me' because I'm Asian, or I'm a fetish. That's sometimes how I feel. I just want them to be attracted to me because I'm a person."

"If I could go back and talk to my young, little gay self, I think the advice I would give is just to relax," said Kawakami. "Enjoy being a kid because not everything is so serious. I remember having so much anxiety as a child. But it's going to be fine, and you're going to have a lot more fun in the future. You're going to have a great time."

The LGBTQIA+ community is not a monolith. It is multicultural, multi-ethnic, multi-faith and multidimensional. This Pride Month, we're celebrating members of that diverse community as a part of a special series called Our America: Who I'm Meant to Be. Click here for more stories from your city and around the country.
EMBED More News Videos

The LGBTQIA+ community is multicultural, multi-ethnic, multi-faith and multidimensional. Watch "Our America: Who I'm Meant To Be."