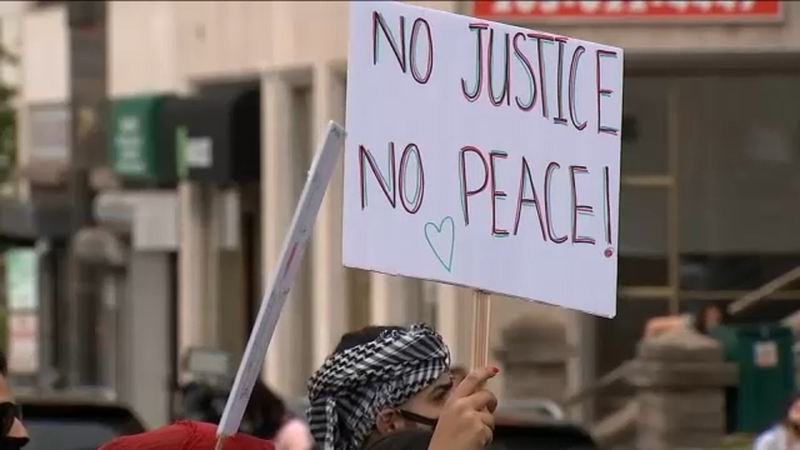 YONKERS, New York (WABC) -- Demonstrators were in an uproar - they have families, they are mad, and they want to bring attention to the situation on the Gaza Strip. They feel the United States is not doing enough, and they are pleading for help.

American Palestinians are speaking out for their loved ones back home, and they are praying for peace.

Demonstrators were of all ages - some born in the United States, others born in Palestine. They are heartbroken as in the past week, the hostilities escalated between the Palestinians and the Israelis overseas.
EMBED More News Videos


"People are dying, children like me. People like me are dying every day, and I will not stand for that," said Yasmine Aldasooky.

The latest Israeli airstrikes on Gaza City flattened three buildings and killed at least 42 people, making it the deadliest single attack. Families were buried under piles of cement rubble as a result of that airstrike. Young children have been killed, leaving many people helpless.

In an area of the world that has a great history of unrest, this lates outbreak of violence began when Jewish settlers threatened to evict dozens of Palestinian families, and Palestinians clashed with police in response to Israeli police tactics during Ramadan - a situation not settling well.

"They say we are causing it - we're not. They came to our land first - they took our land, and they keep lying to the U.S. a lot," said Usscid Amro.

Palestinians living in the United States say they are in touch with their families overseas and are keeping a close eye on the situation, praying that it stops.