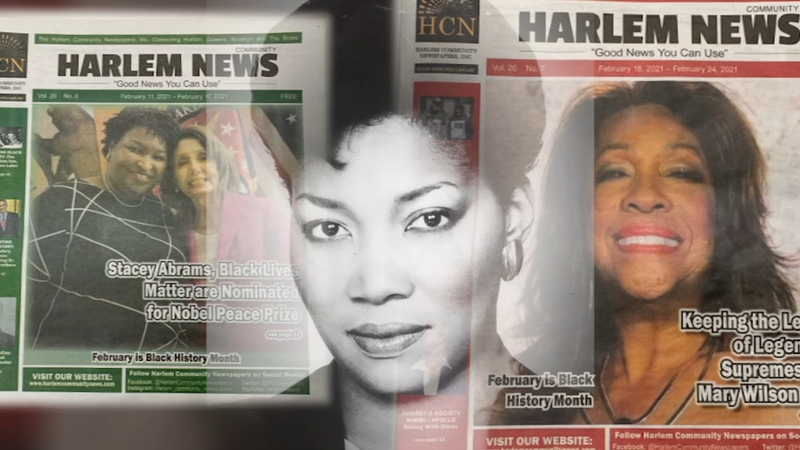 NEW YORK (WABC) -- As we celebrate Women's History Month, we're honoring women who make a difference in their communities.

For decades, Harlem Community Newspapers publisher Pat Stevenson has told the stories of New Yorkers and provided a voice for communities that were often overlooked.

"This business was a male dominated business when I started 25 years ago," she said. "I remember I was the only woman going to the printer."

Stevenson started her own newspaper at a time when women in the newsroom were few and far between.

"I had two grandmothers who instilled in me that basically I can do anything I want to do," she said.

Born in Georgia, Stevenson got an early lesson on the horrors of Jim Crow. Her family would later move to New York City, where she graduated from Andrew Jackson High School and attended Long Island University.

"I did not know what I wanted to do," she said. "I had a couple of jobs in offices, and one day, because I used to read the newspapers every day, one day I just decided, you know, I want to work for a TV station."

She got a job as an assistant at NBC, then later moved to California where stints in radio led her to advertising and marketing, and eventually back to the Big Apple.

As the pandemic has taken an enormous toll on women across the nation, we introduce you to two women -- both mothers -- who are making tough choices.

After years of success, a fateful flight to Africa would change her life.

"There was a storm, and we were falling and people were screaming," she said. "It was bad. And I came back and found out I had a fear of flying so that changed my career."

After that terrifying flight, she decided to start her own business -- and Harlem Community Newspapers was born.

"I chose at that time to start in Harlem, because that's when Harlem became an empowerment zone," she said. "That was 25 years ago."

At that time, there were about 300 community newspapers in New York, but not one in Harlem.

Harlem Community Newspapers filled a void then, and now, they're also serving the Bronx, Brooklyn and Queens.

And despite the pandemic, Stevenson remains excited about Harlem's future.

"Just being in Harlem and in experiencing all of the changes here and all the improvements and the community, you know, has just been exciting to me," she said.