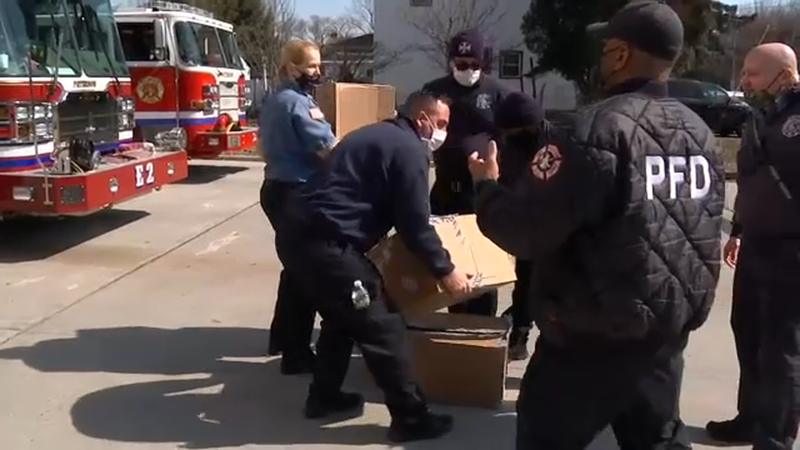 NEW JERSEY (WABC) -- A New Jersey city is coming together to help 72 residents displaced by house fires over the weekend.

Paterson Mayor Andre Sayegh and the Paterson Fire Department announced Thursday that the city will donate clothing to the fire victims and make a call to action for Patersonians to help their neighbors in a citywide clothing drive.

"We've been ravaged by fires," Sayegh said. "In fact, since Valentine's Day, 136 Paterson residents have been displaced by fires."

Despite all the devastation and loss, none of the recent fires claimed any lives -- thanks to the work of the Paterson Fire Department. But not everyone came out unscathed.

"There was also a daring rescue at at one of the fires as well, and very few injuries in the fires that we've had this year," Sayegh said. "In fact, those who have bene injured have been members of our fire department.

The man had been dangling the girl over the railing of the fire escapeas firefighters arrived.

The mayor and the fire department have taken steps help to the fire victims one step farther, leading the clothing drive to help families who lost everything.

"I was personally at three of these fires, and they were extremely rough, hard working fires," acting Fire Chief Frank Calamita said. "The guys did the best they could to save as much property as we could."

The Red Cross and extended family are providing temporary housing, but still, more than 100 people have ben left with only the clothing they were wearing.

Donations are pouring in.

"We already have a shipment that we've received, and we will have them stationed at our fire houses," Sayegh said. "For anyone that would like to contribute, we are accepting donations for those fire victims."

Seven families made up of more than two dozen people were left homeless by the fire.

Sunday morning, firefighters rescued a 3-year-old and her father from burning building on Fair Street.

Authorities say the father was holding his daughter over the railing of a second-floor fire escape as the flames drew closer.

"He probably started to panic a little bit, and you know, was ready to drop the daughter," firefighter Robert Santore said. "We came and I told him 'No, no, don't do anything, I'm coming up.' I proceeded to go up the ladder of the fire escape, he handed the daughter to me, and I came about halfway back down. (Firefighter) Brian (Hirschmanner) was below me. I handed the baby off to him, and I went back up to help the adult."

"It's just part of work," Hirschmanner said. "I mean, it sounds cliché, but it's just what we do every day."