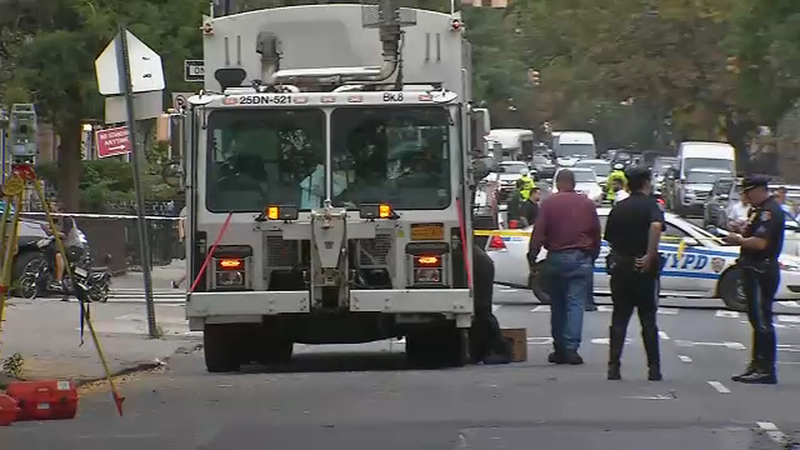 CROWN HEIGHTS, Brooklyn (WABC) -- A 37-year-old man was struck and killed by a New York City sanitation truck that was allegedly driving the wrong way down a one-way street in Brooklyn Thursday morning.

The crash occurred around 7:30 a.m. near the intersection of Brooklyn Avenue and Eastern Parkway in the Crown Heights section.

The truck remained at the scene, where the victim was pronounced dead.

Authorities say the truck was traveling westbound on the Eastern Parkway Service Road when it approached the intersection of Brooklyn Avenue, at which time the driver allegedly made an improper right turn northbound on Brooklyn Avenue to travel southbound against the flow of traffic.

The victim was walking eastbound in a marked crosswalk was he was struck with the front driver's side portion of the truck.

The truck then traveled over the pedestrian's body, continuing northbound in the wrong direction of travel and dragging him for several feet.

The driver then turned around in the correct direction and came to a stop.

When police arrived, the sanitation truck was parked in the same direction as all the other cars on Brooklyn Avenue, as if it had been heading north when the pedestrian was hit.

But the surveillance camera video showed a different story. "They watched the footage and they discovered that the garbage truck was going against traffic, going entirely the wrong way, hit the pedestrian and then apparently tried to turn around," said wellness center owner Aura Chaya Gispan.

The video showed the truck turning around after the accident so it would look like the vehicle was going in the right direction.

The driver, 33-year-old Aaron Gilchrist, is charged with failure to yield to a pedestrian, driving the wrong direction on a one-way street and failure to exercise due care.

The Department of Sanitation released a statement, saying, "Sanitation Worker Aaron Gilchrist, who has been with the DSNY since December 2005, has been suspended. We continue to cooperate fully with the NYPD. In addition, a DSNY safety investigation is also underway."

The investigation is ongoing. The name of the victim has not yet been released.