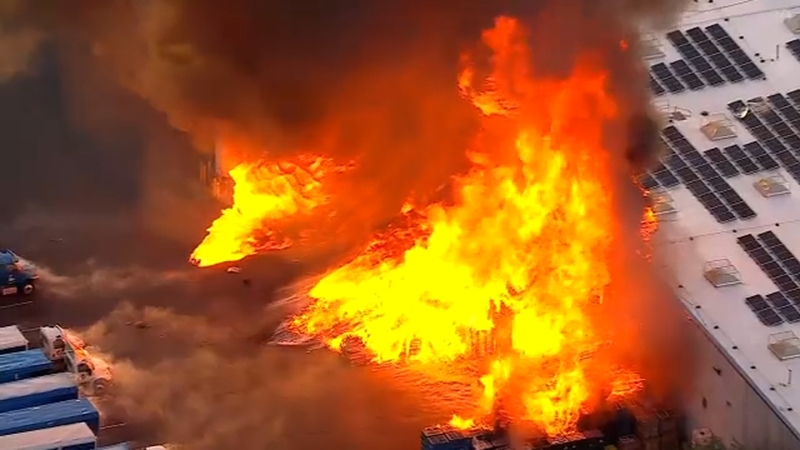 PISCATAWAY, New Jersey (WABC) -- The massive fire was finally out at the PepsiCo factory in Piscataway, New Jersey Wednesday morning as a few spots still smoldered.

The fire was focused around the back of the building.

Video from Newscopter 7 captured the scene moments after the fire began just before 7 p.m. Tuesday.

Shannon Sohn reports on a massive fire raging at a building in Piscataway, New Jersey.

Fire could be seen shooting through the roof of the building.

There were reportedly employees in the building when the fire broke out, but they were able to escape.

People living nearby were concerned about the smoke and if anything burning there is toxic.

"Out of nowhere, I hear boom, boom, boom, and it sounds like it's the neighbors upstairs just slamming on the ground but then we go outside and we see that it's like explosions from the place," an eyewitness said.

"I saw all this fire, the explosion, everything, all this smoke coming from the sky. It was pretty amazing to me, I've never seen that much black smoke, thick smoke in the sky," another eyewitness said.

Officials are still working to determine the cause of the fire at one of the company's largest distribution centers in this region.

Two firefighters suffered minor injuries. One suffered heat exhaustion while the other injured their shoulder, but the injuries were not considered serious.

"On Tuesday evening, a fire started outside of the Pepsi plant and warehouse in Piscataway, NJ. Details of how the fire started will be investigated. First responders are on-site working to ensure the fire is controlled and quickly put out. All employees and people who were in the facility have been evacuated with no injuries."