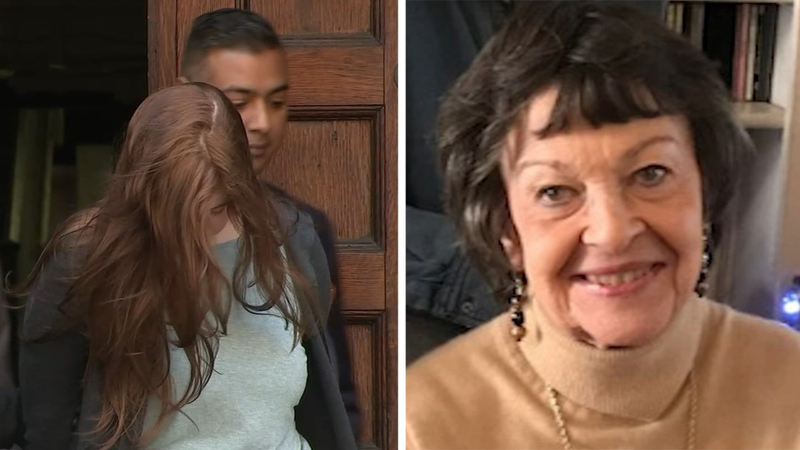 CHELSEA, Manhattan (WABC) -- A woman wanted for allegedly shoving a beloved 87-year-old grandmother who later died from her injuries in a random unprovoked attack in New York City surrendered to police Tuesday.

Lauren Pazienza, 26, of Port Jefferson, turned herself in at the 10th Precinct and was charged with manslaughter.

Barbara Maier Gustern, an active performer and voice coach, was wrapping up rehearsal on March 10 in Chelsea when the woman approached her from behind and pushed her to the ground.

Pazienza was supposed to walk down the aisle in June, instead she hid her face behind her long, red hair and said nothing as she was led from the precinct to a police cruiser, but onlookers had plenty to say.

Instead of a priest, Pazienza cried in front of a judge as bail was set at half a million dollars cash for alleged manslaughter.

"She was crying. She was in pain. She was being accused of a horrible act and she's a very moral, right, just person, who went to high school, went to college," defense lawyer Arthur Aidala said. "Has a job. Has a fiancé. Has a family. For her, she's in the twilight zone."

A source close to the case tells Eyewitness News that Pazienza did not know the victim.

Gustern was walking along 28th Street on her way to attend a student's performance when the woman attacked her near Eighth Avenue.

A.J. Gustern is the victim's grandson.

"She crossed the street, shouted something derogatory at my grandmother, and pushed her down," he said. "And then fled across the street and just fled."

Authorities believe Pazienza and her fiancé took the subway to Queens after the fatal attack. Later, she reportedly fled to her parents' home on Long Island. Her social media accounts have been deleted.

The next court date is Friday. An evaluation has been ordered for the defendant but the motive, if there is one, is still unclear.

For days, A.J. Gustern says he tried to imagine who the suspect would turn-out to be.

"To be honest, I'm white hot today," he said. "I've been trying to give this woman the benefit of the doubt. It seems to me like this woman comes from a similar background. Like what really got to me was finding pictures of her smiling in art galleries, dressed nicely with other people."

Gustern had been known in the theater world for decades.

She worked with singers ranging from the cast members of the 2019 Broadway revival of the musical "Oklahoma!" to experimental theater artist and 2017 MacArthur "genius grant" recipient Taylor Mac, who told the New York Times she was "one of the great humans that I've encountered."

Her late husband, Joe Gustern, was also a singer, with credits including "The Phantom of the Opera" on Broadway.

A funeral service for the elderly grandmother is scheduled for Saturday.