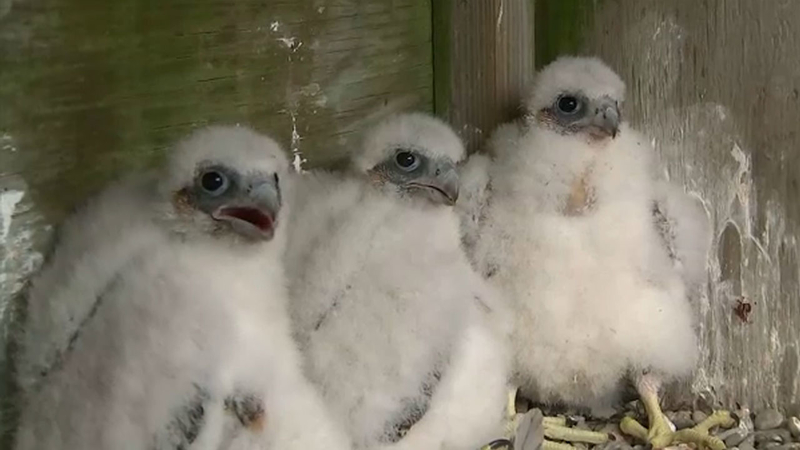 STATEN ISLAND, New York (WABC) -- Experts are helping a once-endangered species make a comeback around New York City by finding the animals a place to live high atop our local bridges.

For years, the Port Authority has helped make the tops of some of its bridges attractive homes for nesting falcons.

The problem was birds were nesting on New York City building ledges and the eggs were rolling off before they hatched. Special nests were designed as a combined effort between Port Authority and the city and state to help.

"All of New York State, the very first two sites that we saw re-nesting of the falcon was on the Verrazano-Narrows Bridge and the Throgs Neck Bridge right here in the city," Naderiski said. "We adapted by building them a little nest box since the falcon is not a nest-building species and they have taken onto these nest boxes terrifically."

Eyewitness News Meteorologist Amy Freeze checked out a nest on the newly constructed Bayonne Bridge on Wednesday where three eggs had just hatched.

Naderiski and Freeze evaluated the babies and tagged all three -- two females and a male. Their sex is determined by their foot size.

Each leg was tagged for two reasons: One for the federal government and one so birdwatchers can read the numbers with their binoculars and report locations of the birds over the course of their lives.

They are expected to leave the nest after three weeks. The three babies were named Barbara Feldon (Agent 99 from "Get Smart"), Ben Franklin and Purdita (the dog mom from "101 Dalmatians").

The birds live as long as 20 years and they migrate all over the world.

"Down the Atlantic coast, to Central America, we've even even had birds come from Alaska to New York," Naderiski said. "So these birds are known for their long migration patterns."

Click here to learn more on how the program started and click here for the history of NYC falcons.