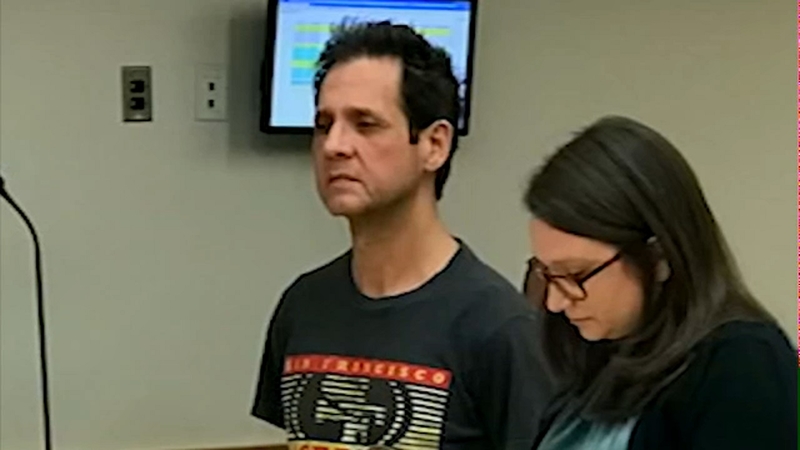 NEW YORK (WABC) -- After Ruben Roncallo, the owner of a pit bull that latched on to a 22-year-old woman's foot on a Lower Manhattan subway, was arrested Thursday, he then was turned over to detectives in the Bronx for a separate harassment charge - and it also involved his pit bull.

"(He) told me he was going to kill me, my granddaughter. Brought a dog here - kicked my door in, broke the banister," Farmer said.

The Bronx woman says Roncallo kept showing up to her Bronx apartment behaving violently and erratically.

By Roncallo's side is his now infamous pit bull, seen on cell phone video attacking a woman on the 4 train in Manhattan last week.

Farmer says her problems with Roncallo started in November.

"He's crazy. One minute he sits here, he talks...the next minute he's flipping out talking about oh he's Lucifer. He said Obama and Trump put him here to kill me. He gonna' slice me up," she added.

On Friday night, the Brownsville man was arraigned in the Bronx, accused of harassing Farmer. She says Roncallo thought he and her son were a couple, and that she was interfering in their relationship.

She says just last week he came beating on her door saying, 'when Ruben gets upset, the dog gets upset.'

As for whether or not his pit bull should have been allowed on the train, Roncallo says it's a service dog.

Due to ADA regulations, authorities can only ask an owner two questions. First, 'is that a service dog?' and second, 'what is that service dog trained to do?'

In New York, the owner is not required to provide proof.

Farmer says Roncallo has only had the dog for about a year. "He found the dog on the street. Downtown by 42nd Street - he wanted to give it to me, but I told him I have my own."

Roncallo was released without bail and ordered to stay away from Farmer.