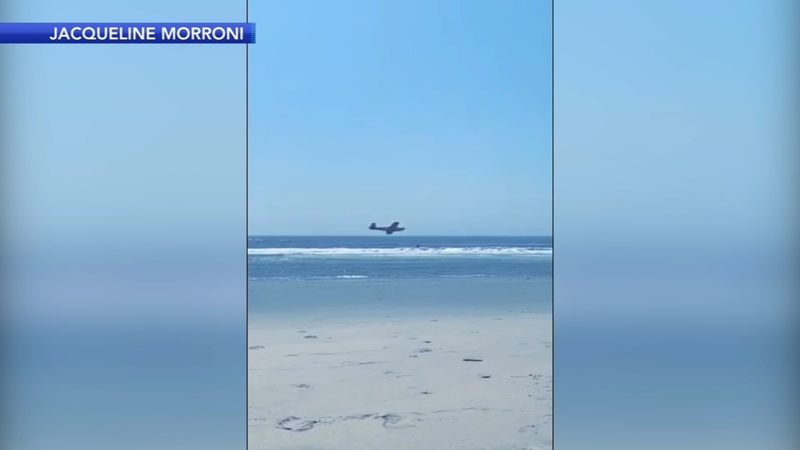 Small aircraft crashes into ocean in Cape May, New Jersey

CAPE MAY, N.J. -- A search has been suspended after a small aircraft crashed into the ocean in Cape May, New Jersey.

U.S. Coast Guard officials confirm a Mooney M20J single-engine plane went down in the water approximately 1,200 feet from the lighthouse before 11:30 a.m.

"I heard a big boom, like a big explosion," said witness Patty Oat.

Chopper 6 is over the scene of where a small aircraft crashed into the ocean in Cape May on May 29, 2019.

"Next thing I know all the lifeguards from Cape May were racing down the beach," Oat added.

Other witnesses who saw the plane gliding by the water said they knew something was amiss.

"We thought they were just showing off and buzzing the beach, they were very close. It didn't seem right at all to me, I don't know how illegal it is to be that close to the water," said Frank Newman and his wife Annakate Price.

Officials say there was one person on board the aircraft that is now submerged.
EMBED More News Videos

The U.S. Coast Guard as well as local first aided in the search.

#BREAKING: US Coast Guard officials confirm a small single engine plane went down before 11:30 today in Cape May, N.J.

Viewer Jacqueline Morroni of Villas captured the moments the small plane veered into the water.

The aircraft crashed in the area of South Cape May Meadows Path, at the southwest tip of the Cape May peninsula.

Late Wednesday night, Coast Guard officials said the search for the missing pilot has been suspended.