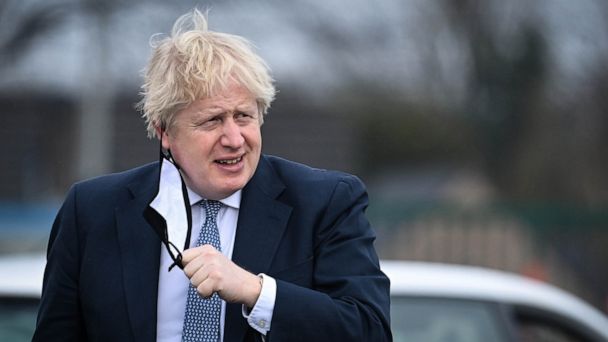 LONDON -- Over 50 people will be questioned in connection with parties held during lockdowns in Downing Street, police said, as the criminal investigation into the conduct of Prime Minister Boris Johnson and his staff gathers pace.

The investigation into a number of events held in Downing Street by the prime minister's staff while the country was under lockdown conditions throughout 2020 has dominated the headlines in the British media in recent weeks. The Metropolitan Police are investigating eight gatherings, and they are currently examining over 500 documents and 300 images provided to them by a separate, internal investigation led by the civil servant Sue Gray.


Johnson, according to reports in the British media, is expected to be among the more than 50 people being asked by the police to explain their participation in the events.

The prime minister's office said he had not yet been contacted by the police.

The scandal has dominated the headlines in recent weeks, even as the prime minister has sought to take a strong line on Russia over Ukraine and offer reassurance to the U.K.'s European allies.

Over a dozen gatherings alleged to have broken social-distancing rules are believed to have taken place throughout 2020, including a Christmas event, two leaving parties for departing staff and a summer gathering in the Downing Street garden, where up to 100 staffers where invited to bring their own booze. All took place while the country was under varying degrees of restrictions.

The full findings of Gray's report will not be published until after the police investigation has been concluded, but an update published on Jan. 31 accused the government of "failures of leadership and judgment" in relation to the gatherings.

The interim findings also notes that "the excessive consumption of alcohol is not appropriate in a professional workplace at any time."

In response, the prime minister apologized and promised to overhaul the culture of his department. He has faced down growing calls for his resignation from opposition lawmakers and a few members of his own party.

Several key staff in his office have resigned in response to his handling of the crisis.

Most of those contacts will be made via email, though the questionnaires do have legal status and must be responded to within seven days.


Speaking to BBC radio on Thursday, the head of the Metropolitan Police, Cressida Dick, said that some of those questioned could end up being fined.

"Fifty people are being asked to account for what they are doing," she said. "Some, not all, may end up with a fixed penalty notice and I recognise this has disgusted many members of the public."

The prime minister's office has refused to elaborate on questions of whether Johnson will resign if he is among those fined for attending the gatherings, as his future as leader of the country largely depends on whether he can maintain the support of lawmakers within his own Conservative Party.

In a speech to the Institute for Government, former Conservative Prime Minister John Major, in office from 1990 to 1997, accused Johnson of breaking the rules on Thursday.

"The prime minister and our present government not only challenge the law, but also seem to believe that they, and they alone, need not obey the rules, traditions, conventions - call them what you will - of public life," he said. "The charge that there is one law for the government, and one for everyone else is politically deadly - and it has struck home."
Report a correction or typo
Related topics:
abc newsnational
Copyright © 2022 ABC News Internet Ventures.
TOP STORIES
3 shot in Queens, including off-duty correction officer, police say
Bicyclist killed in hit and run; driver fled in another car with baby
2 Long Island beaches closed after lifeguard nipped by shark
2 friends shot in cab on the way home from concert descibe incident
Security incident at JFK Terminal 4 cleared
1 killed, several injured in shooting at mechanic shop in NYC
Thousands of dead anchovies wash ashore, fall from sky in California
Show More
3 dead, 3 critically wounded in Copenhagen shopping mall shooting
Where to watch 2022 Fourth of July fireworks
Macy's 4th of July Fireworks 2022: Everything to know
No serious injuries after minor gas explosion in NYC pizzeria kitchen
AccuWeather: Mostly sunny and nice
More TOP STORIES News