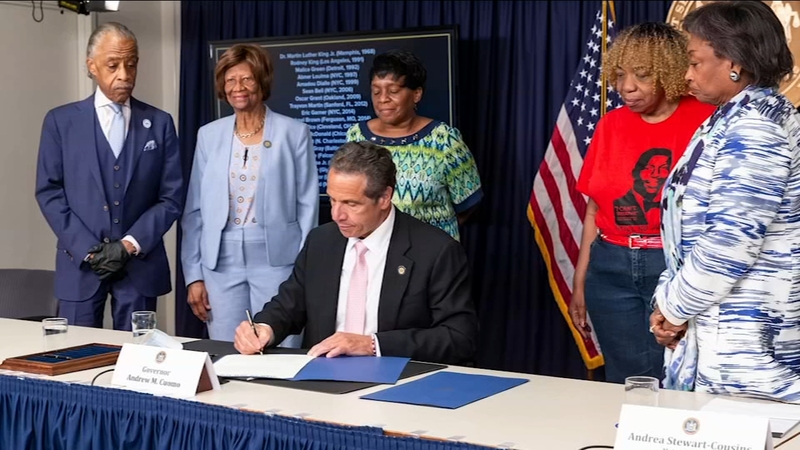 They include making police use of chokeholds that result in injury and death a crime and repealing a measure known as 50-a that shields police disciplinary records from public view.

Cuomo cast all of this as significant reform,and he mocked ideas being pushed in other states as window dressing.

"There is no quick fix to this," Cuomo said. "There is no stop tear gas, change the uniforms."

Cuomo issued an Executive Order stating that local governments and police agencies need to:
--Develop a plan that reinvents and modernized police strategies and programs in their community. Any agencies that don't comply will not get funded.
--Must formulate a plan addressing use of force by police officers, crowd management, community policing, implicit bias awareness, de-escalation training and practices, restorative justice practices, community based outreach, a transparent citizen complaint disposition procedure and other issues raised by the community.
--Must enact by local law by April 1.

The governor said the goal of the executive order is to restore trust.

"How many times do you have to see the same case before you do something," Cuomo said. "God bless this country for standing up and saying enough is enough."

The bill allows the attorney general to investigate and prosecute when someone dies during or after an encounter with a police officer.

"This is a great day for advocates," Rev. Sharpton said. "(Cuomo) has raised the bar with how we deal with policing."

"Governor Cuomo and our legislative leaders have no business celebrating today," he said in a statement. "New York state had been failing our communities for decades: failing to provide economic opportunity, failing to educate our youth, failing to care for the vulnerable and the mentally ill. Police officers spend our days addressing issues caused by these failures. Now, we won't even be able to do that. We will be permanently frozen, stripped of all resources and unable to do the job. We don't want to see our communities suffer, but this is what Governor Cuomo and our elected leaders have chosen."

Diana Rocco breaks down the bill that would prevent departments that don't change policies from receiving state funding.

The passage of the legislation came as the state's Attorney General Letitia James on Wednesday announced that two advisers, former U.S. Attorney General Loretta Lynch and New York University law professor Barry Friedman, will help guide her ongoing investigation into interactions between the NYPD and the public amid recent protests.

"The right to peacefully protest is one of our most basic civil rights, and we are working without rest to ensure that right is protected and guarded," James said.

Lynch, a former U.S. attorney for the Eastern District of New York, led the U.S. Department of Justice's investigations into police misconduct in several large police department during her time as the nation's attorney general. "It is time to examine recent events to ensure that all New Yorkers receive truly equal protection under the law," she said.

As U.S. Attorney, Lynch took up a federal investigation into the 2014 police chokehold death of Eric Garner. The probe continued through Lynch's tenure as Attorney General.

Another bill makes it easier to sue individuals who make spurious 911 calls based on another's background, including race.

"Make no mistake, we know what we did was not a cure," State Senator Andrea Stewart-Cousins said. "It's a first step. It acknowledges that laws alone are important, but they can't fix racism in America."

The chokehold and body camera bills drew support from Republicans, who largely opposed the police records legislation for allowing the release of potentially false complaints against officers.