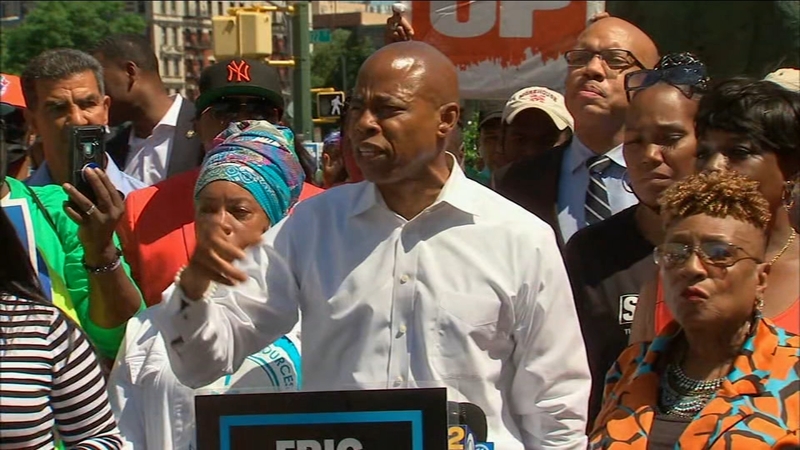 More than 100,000 take advantage of early voting ahead of Primary Day

NEW YORK CITY (WABC) -- Primary Day in New York City is just four days away, and the Democrats vying to be the next mayor of the Big Apple are making their final pitches to voters.

More than 100,000 people have already taken advantage of the city's early voting, even as the implementation of ranked choice voting adds to the mystique and leaves the outcome hard to predict.

A new poll out Friday from the New York Post shows Brooklyn Borough President Eric Adams in the lead, and that crime -- specially violent crime -- is overwhelmingly the number one issue in the race.

The poll has Adams at 21.3%, with activist and attorney Maya Wiley in second with 16.5%. She is virtually tied with former Sanitation Commissioner Kathryn Garcia, who checks in a 16.2%, while one-time frontrunner Andrew Yang has dropped to fourth with just 9.6%.
EMBED More News Videos

Primary Day in New York City is just four days away, and the Democrats vying to be the next mayor of the Big Apple are making their final pitches to voters.

But the poll also indicated that about one in five New Yorkers still undecided on who they want for mayor, surely enough to make margins tighter.

On Friday morning, Adams campaigned in Harlem with several mothers of crime victims, including the mother and a Lesandro "Junior" Guzman-Feliz, who was killed in a machete attack in 2018 in the Bronx.

Adams unloaded on Wiley and others, who he says are distorting his record on crime and police reform.

Appearing in Brooklyn, Wiley all but stopped short of calling Adams a liar.

"Eric Adams has said, and he said it a year ago, and he has said it on this campaign trail, he will bring back stop and frisk," she said. "It's a matter of public record. I'm not calling him anything."

She said Adams is misguided.

"I'd rather stop the gun from being fired than I would make sure we have police stopping people in the street," she said.

Garcia, meanwhile, campaigned at a Muslim community center in Midwood, trying to stay out of the war of words.

"My plan is, we're not going to defund the police, we're going to have smart policing," she said. "I think the voters don't want to see the back and forth. You're not listening to them."

New York City Comptroller Scott Stringer voted in early voting at his polling location on the Upper West Side Friday. He and Wiley have been extremely critical of Adams, claiming that he will indeed bring back stop and frisk, and they say that he will be a mayor like Rudy Giuliani.

"I know what my number one ballot is," he said. "But I'm going to rank other candidates who I believe will make best mayor governmentally."