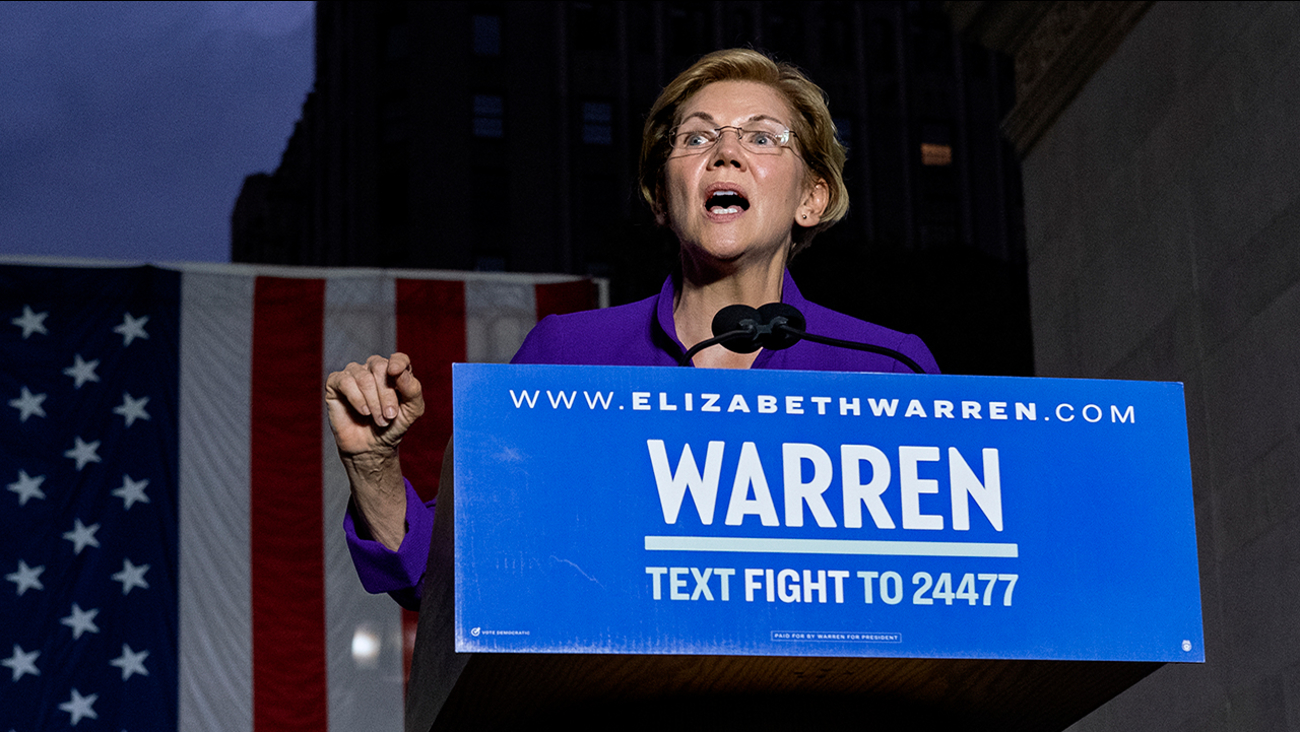 AP
NEW YORK -- Facing thousands of cheering supporters in the nation's largest city, Democratic presidential contender Elizabeth Warren on Monday decried President Donald Trump as "corruption in the flesh" and outlined her plans to root out corruption in the White House, Congress and courts.

"Corruption has put our planet at risk. Corruption has broken our economy. And corruption is breaking our democracy," said Warren, a Massachusetts senator who has emerged as a leading presidential contender.

While aggressive, the message was a familiar one. Warren has embraced corruption as a central campaign theme from the beginning of her 2020 presidential bid. But rarely has Warren addressed such a crowd with such a symbolic backdrop.

She faced throngs of supporters from a podium under Washington Square Park's storied arch, a made-for-television moment designed to showcase the strength of her candidacy as much as the ambition of her message.

The event was set close to the site of the Triangle Shirtwaist Co. fire, which killed more than 140 workers in 1911.

She framed those deaths as the direct result of corruption. Many women died because factory owners neglected safety features to save money, with the implicit support of local elected officials who declined to intervene.

Warren charged that the same thing is happening today.

"Giant corporations have bought off our government," she said.

Specifically, her anti-corruption plan would "end lobbying as we know it" by instituting a lifetime ban on members of Congress and White House Cabinet secretaries from ever becoming lobbyists. At the same time, corporate lobbyists would be blocked from working for the federal government.

Both practices are common today.

She also would prohibit federal judges from avoiding misconduct investigations by leaving their posts, prevent courts from sealing settlements in public health and safety cases and ban class-action waivers for all cases involving employment, consumer protection, antitrust and civil rights.

And taking direct aim at issues involving the Trump administration, Warren would require candidates for public office to post their tax returns online. Presidents, Cabinet secretaries and members of Congress would also be prohibited from owning businesses on the side.

Trump, of course, has refused to release his tax returns years after promising to do so, and the Trump organization continues to do business around the world.

"Donald Trump is corruption in the flesh," Warren said. "He is sworn to serve the people of the United States, but he serves only himself and his partners in corruption."

Warren noted, however, that Trump is only a symptom of the corruption that has infected the U.S. political and economic systems.

She has long argued that the nation's modern government only works for "the wealthy and the well-connected" like big energy, health care and insurance companies that employ lobbyists to advance their priorities over the best interests of ordinary citizens.

She wrote that popular policies championed by the Democratic Party's progressive wing - and many in its crowded field of presidential hopefuls - like universal child care, an overhaul of the federal criminal justice system, gun reform and plans to promote affordable housing have been "stymied because giant corporations and billionaires who don't want to pay taxes or follow any rules use their money and influence to stand in the way."

Warren's campaign noted that she already proposed a series of anti-corruption measures in Congress last year, but it says the proposal released Monday goes farther.

Warren has emerged as a central player in the broader fight for the direction of the Democratic Party in the age of Trump.

Like her Democratic rival Bernie Sanders, Warren is demanding transformational change that Trump and his allies deride as socialism. Warren and Sanders are up against Democratic front-runner Joe Biden, a favorite of the party's establishment wing.

Warren didn't identify any of her Democratic opponents by name.

She noted, however, that "too many politicians in both parties have convinced themselves that playing the money-for-influence game is the only way to get things done."

Warren doesn't participate in high-dollar fundraising events as a 2020 candidate, though she did before launching her presidential campaign.

On Monday, looking out at the swelling crowd, Warren noted that she typically takes selfies with everyone who wants one at her events.

"Tonight is a little something different," Warren said.

Long Island enters Phase 1 of reopening, but not everything open