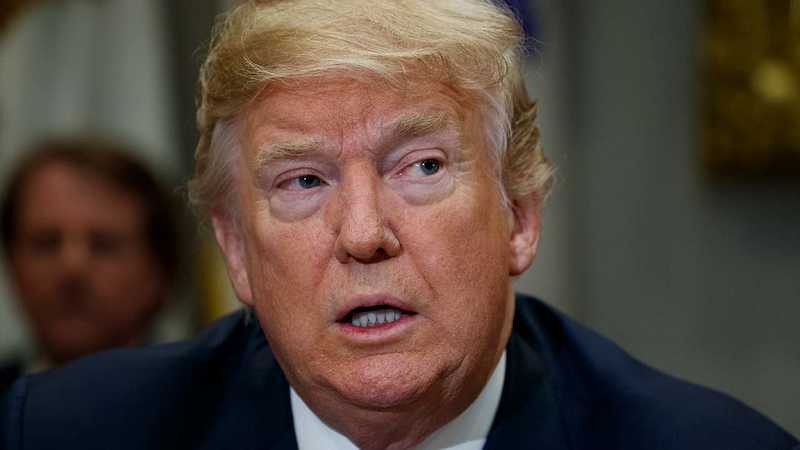 Democratic Attorney General Barbara Underwood filed a lawsuit Wednesday against the foundation and its directors, Trump and his children Donald Trump Jr., Eric Trump and Ivanka Trump. The suit seeks $2.8 million in restitution and the dissolution of the foundation.

Underwood said the foundation illegally helped support the Republican's campaign by raising money at a nationally televised fundraiser in January 2016, then allowing campaign staffers to dictate how the money was spent in grants.

"As our investigation reveals, the Trump Foundation was little more than a checkbook for payments from Mr. Trump or his businesses to nonprofits, regardless of their purpose or legality," Underwood said. "This is not how private foundations should function, and my office intends to hold the foundation and its directors accountable for its misuse of charitable assets."

President Trump responded on Twitter with a string of tweets:

Now that I am back from Singapore, where we had a great result with respect to North Korea, the thought process must sadly go back to the Witch Hunt, always remembering that there was No Collusion and No Obstruction of the fabricated No Crime.

So, the Democrats make up a phony crime, Collusion with the Russians, pay a fortune to make the crime sound real, illegally leak (Comey) classified information so that a Special Councel will be appointed, and then Collude to make this pile of garbage take on life in Fake News!

....Schneiderman, who ran the Clinton campaign in New York, never had the guts to bring this ridiculous case, which lingered in their office for almost 2 years. Now he resigned his office in disgrace, and his disciples brought it when we would not settle.

The lawsuit alleges that Trump Foundation raised in excess of $2.8 million in a manner designed to influence the 2016 presidential election at the direction and under the control of senior leadership of the Trump presidential campaign, with the foundation raising funds from the public at the nationally televised fundraiser Trump held in lieu of participating in the presidential primary debate in Des Moines, Iowa, on January 28, 2016.

According to the investigation, the Trump Foundation also entered into at least five self-dealing transactions that were unlawful because they benefited Trump or businesses he controls. These include:

The Trump campaign, at the time, said the foundation intended to cooperate with the investigation. The campaign had previously called Schneiderman "a partisan hack" who backed Trump's 2016 Democratic rival, Hillary Clinton.

The 31-year-old foundation said that it has given more than $19 million to charitable causes while keeping expenses minimal, and that Trump and his companies have contributed more than $8 million.