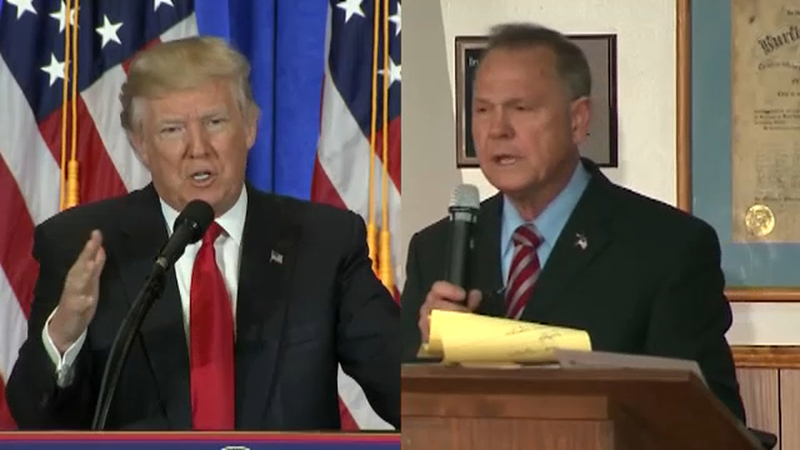 White House spokesman Raj Shah said Saturday that Trump has recorded the phone message on Moore's behalf. Moore's campaign said the calls will go out to households Monday, a day ahead of the U.S. Senate election.

Moore is locked in a heated contest with Democrat Doug Jones for the seat that previously belonged to Attorney General Jeff Sessions.

Trump urged Alabamians to vote for Moore during a Friday-night rally in neighboring Florida.

Trump had done similar calls for incumbent Sen. Luther Strange who lost to Moore in the GOP primary.

Trump, in a tweet early Saturday, hours after boosting Moore's campaign during a Florida rally, framed the race as a referendum on his efforts to reshape the country and said Democrat Doug Jones would work in lockstep with his party's leaders on Capitol Hill to oppose the Trump agenda.

With Moore denying allegations of sexual misconduct that have arisen late in the campaign, Trump basked in what he called "a big contingent of very enthusiastic Roy Moore fans" at the Friday night event in Pensacola, the Florida Panhandle city near the state line with Alabama.

In a rally cry to Alabama voters, the president tweeted that "we can't have" a liberal in the mold of Sen. Chuck Schumer, D-N.Y., and Rep. Nancy Pelosi, D-Calif., holding the seat in a Senate where the GOP hold a slim 52-48 edge.

"Need your vote to Make America Great Again! Jones will always vote against what we must do for our Country," Trump wrote.

At the campaign-style event in Pensacola, Trump claimed Jones was the Democratic leaders' "total puppet and everybody knows it."

Trump's wide-ranging speech also touched on the immigration system and the nation's economic performance since he took office. As Trump spoke about Moore, the Republican candidate tweeted Trump's comments to his own followers.

Trump also taunted Beverly Nelson, one of Moore's accusers, who had presented a yearbook inscription by Moore as a key piece of evidence that the candidate knew his accuser. Nelson said Friday she had added a notation marking the date and place where it was signed.

"Did you see what happened today? You know, the yearbook? Did you see that? There was a little mistake made," Trump said, shifting to singsong. "She started writing things in the yearbook."

Moore, who is 70, is facing multiple allegations of sexual misconduct, including accusations that he molested two teenage girls and pursued romantic relationships with several others while in his 30s. Moore has denied the allegations.

During the rally, Trump also crowed about stock market gains and other upbeat economic indicators. He said he was confident he'd win re-election in 2020, despite his dismal approval rating.

The White House said the rally was a campaign event for Trump. But the location - so close to Alabama and feeding its television markets - stoked speculation that it was a backdoor way for the president to boost Moore's campaign without actually setting foot in the state.

White House spokesman Raj Shah said the president and White House have made clear that the Moore allegations are "troubling and concerning" and "should be taken seriously." He also noted that Moore has maintained his innocence, and said that should be considered as well.

"Ultimately his endorsement is about the issues," Shah said.

Trump, who overcame allegations of sexual misconduct to win last year's presidential election, looked past the charges against Moore and formally endorsed the former Alabama judge this past week for the seat once held by Jeff Sessions, now U.S. attorney general.