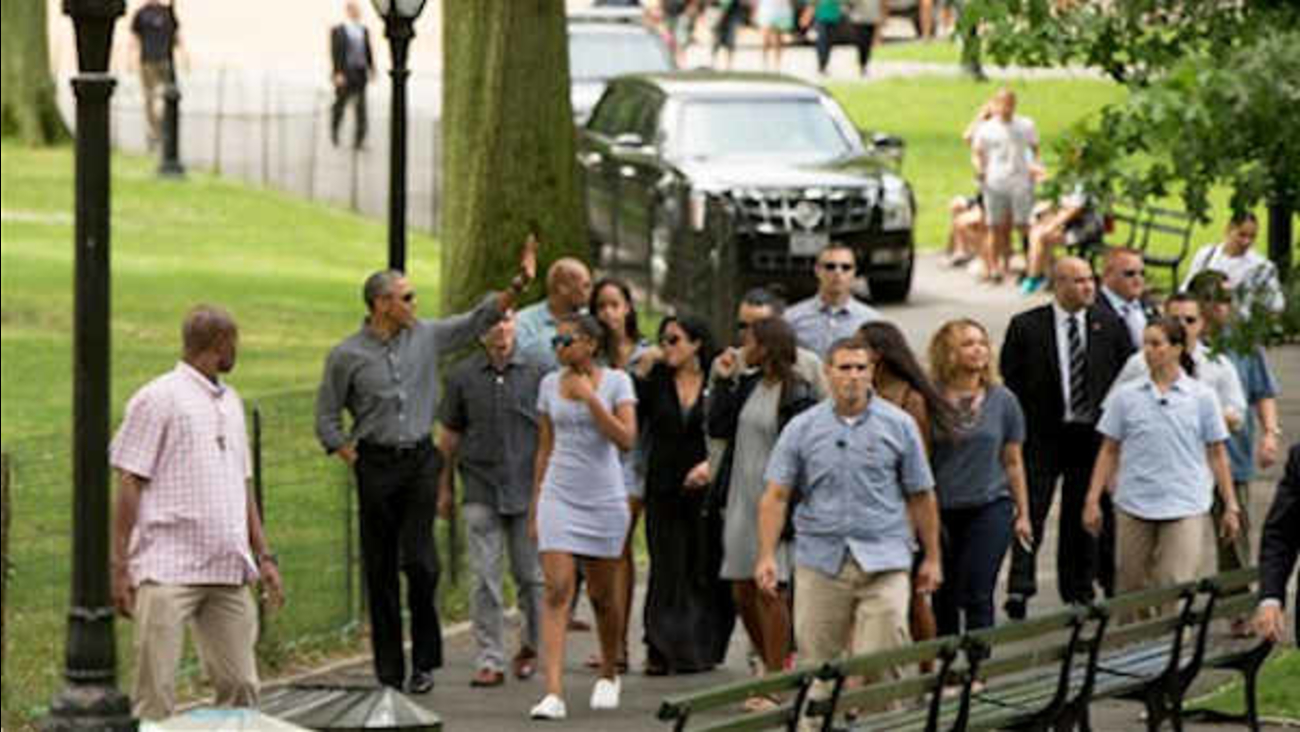 NEW YORK -- It's inevitable: At some point, teenage kids just aren't that into their parents anymore.

President Barack Obama, parent to two teenage daughters, set out to combat that trend by hanging out with his girls in New York.

The trio, plus some of the girls' friends, seemed intent on packing a lot into their 24 hours together in the city.

But no one was out of the hotel door too early on a rainy Saturday morning after zigzagging around Manhattan in dad's motorcade into the wee hours on Friday night.

The visitors finally emerged about 11:30 a.m., as the sun broke though, and they made made a beeline for Central Park, joined by the president's sister, Maya Soetoro-Ng and her husband, Konrad Ng.

They strolled along the park's pathways, bringing pedicabs, bikers, skaters, horse-drawn carriages and walkers to a screeching halt as people whipped out cellphones to capture the moment.

A Saturday afternoon Broadway matinee was in the offing, believed to be "Hamilton," the hit hip-hop musical about the Founding Fathers.

The Obamas had lingered past 11 p.m. over dinner at an Italian place in Greenwich Village on Friday and took an after-hours tour of the Whitney Museum that lasted until midnight.

A New York weekend was Obama's idea. He often laments that his girls are less interested in spending time with him now that they are older. But the concept gets a little complicated, of course, when dad is the president.

Obama's every move requires massive security precautions that tie the bustling streets of New York in knots, and he can attract throngs of onlookers in an instant.

Hearty cheers went up from the street corner late Friday as the Obamas left Carbone; a crowd had massed outside the restaurant when word spread that he was there.

This is not the ideal environment for father-daughter bonding.

But after more than 6 1/2 years in the White House fishbowl, Malia, 17, and Sasha, 14, have adjusted to all the attention and they know how to carry on.

Sasha and two girlfriends hopped aboard Air Force One for the trip to New York without even a hint that they had noticed the photographers and TV cameras pointed in their direction Friday.

Malia was there to meet them in New York. She has been interning on the set of HBO's "Girls" this summer.

First lady Michelle Obama, who sat this trip out, already had her own bonding time with the girls when she took them along on an official trip to England and Italy last month. She's already seen "Hamilton," anyway.

Both Obamas have been growing increasingly sentimental as they watch the little girls who entered the White House in 2009 grow into young women.

"They're hitting the age where they still love me, but they think I'm completely boring. And so they'll come in, pat me on the head, talk to me for 10 minutes, and then they're gone all weekend," the president told an interview last month. "They break my heart."

Beyond New York's innate appeal, Obama's visit to the city also may have given the president a chance to give more thought to where the family will land when they leave the White House in January 2017. New York is among the cities that get the most speculation.

Malia is entering her senior year in high school and has been making the rounds of prospective colleges. She has visited a number of New York schools as she tries to figure out where to study after she graduates. New York University, Barnard College and her father's alma mater, Columbia University, have all been in the mix.

Obama was scheduled to return to Washington on Saturday night. He'll be back in New York for a few hours on Tuesday for one last appearance with Jon Stewart on "The Daily Show" and a Democratic fundraiser.