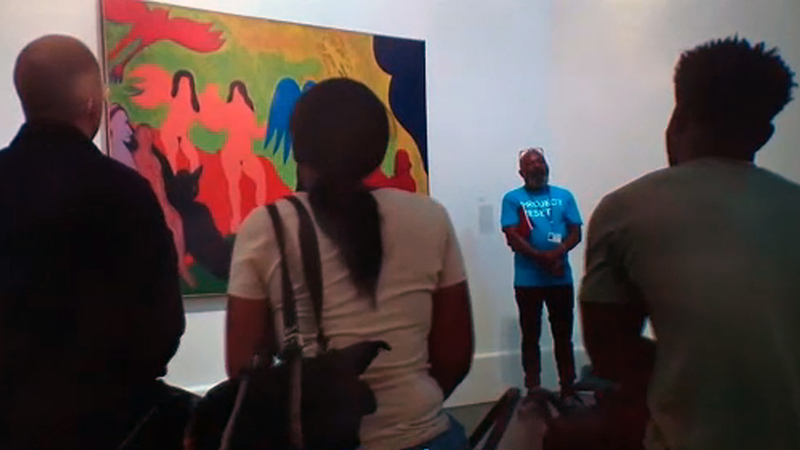 BROOKLYN, New York City (WABC) -- A new partnership between the Brooklyn District Attorney's Office and the Brooklyn Museum will allow those arrested for certain minor offenses to avoid prosecution through art.

District Attorney Eric Gonzalez announced the launch of Project Reset, a diversion program that holds people accountable for minor crimes without prosecuting them. He said a pilot program that launched in 2015 proved to be more effective than traditional prosecution.

Project Reset allows those charged with certain misdemeanors who receive a desk appearance ticket to resolve their cases by completing a diversionary course without ever having to set foot in court.

"Project Reset aligns with my commitment to reduce our reliance on convictions and incarceration while still holding offenders accountable," Gonzalez said. "This program addresses the conduct of those who commit misdemeanor offenses and confronts the consequences of their actions in a more meaningful way than traditional court sanctions."

Gonzalez said that Project Reset launched on May 20, 2019, in all 10 Brooklyn North precincts and expanded to the entire borough on August 5, 2019.

Under the initiative, all individuals arrested for certain misdemeanors, including criminal mischief, petit larceny, disorderly conduct and others, who receive a desk appearance ticket are screened for eligibility. Their assigned counsel will receive an email about the arrest from the Brooklyn DA's Office, giving counsel seven days to conduct outreach and consultation with the prospective participant.

During the course of the next three to four weeks and before the scheduled court appearance to answer the charges, the participants will have to complete appropriate programming.

The Brooklyn Museum offers two courses - one for young adults up to age 25 and another for adults age 26 and up.

During the immersive two-hour curriculum that was created for Project Reset, participants view, analyze and discuss a work of art from the museum's permanent collection in a group setting and learn about its origins and meaning.

The discussion is led by teaching artists, whose own work centers around themes of social justice and prison reform.

Participants then work independently to create their own artwork in response to the discussion in an effort to learn about accepting responsibility and changing one's personal narrative while simultaneously being exposed to art and cultural offerings within their community.

Another offering is being held at the Downtown Brooklyn offices of Brooklyn Justice Initiatives (BJI). Tools for New Thinking is a 90-minute session providing space for adult participants, working with social workers, to identify and discuss situations that they feel escalated unnecessarily and resulted in regrettable outcomes, while learning how their values and thoughts can lead to better outcomes.

Officials say participants who can benefit from tailored services based on their particular needs are offered an individual session with BJI.

If a person completes the session, representatives of BJI notify the Brooklyn DA's Office, which then declines to prosecute the arrest. The case is then sealed, and the person never has to appear in court. Participants have access to defense attorneys throughout the process.

Project Reset started in 2015 as a pilot in Brooklyn for 16- and 17-year-olds. An evaluation of that pilot found that participants were significantly less likely than defendants in a comparison group to be convicted of a new crime within one year.

It also documented improved case processing times and case outcomes, as well as positive perceptions of the program, with more than 95% of participants saying they had made the right decision by entering the program and that they would recommend it to someone in a similar situation.

Project Reset has since expanded to serve all ages, and the program has been implemented in Manhattan and a number of precincts in the Bronx. Brooklyn is the only borough where all defendants who receive desk appearance tickets are eligible without restrictions.

The program is funded through appropriations from the New York City Council as well as private funding from the Cohen Foundation, the Tow Foundation, and the Art for Justice Fund.