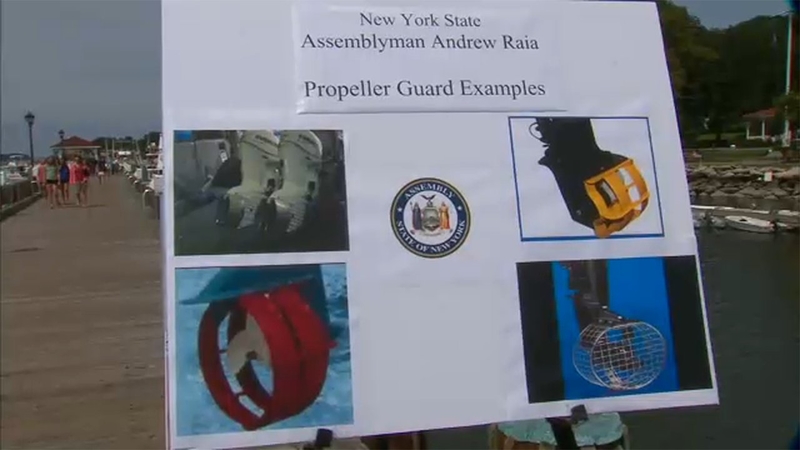 NORTHPORT, Long Island (WABC) -- Lawmakers on Long Island are pushing for change they hope will save a life.

Monday they announced new legislation after a 12-year-old boy was killed during a boating lesson.

It is not something you see all that often as you watch the small boats motoring around in Northport Harbor.

But the time for it has come, according to sponsors of new legislation named for the 12-year-old boy killed in a horrifying propeller accident at the Centerport Yacht Club last month.

Ryan John Weiss had tumbled off a Zodiak during a capsizing drill in a sailing class and he became tangled in the small boat's propeller.

"Ryan would've had a fighting chance if something like that was attached to the little boat he was hit by," said Andrew Raia, New York State Assembly member.

They will propose a law in Albany to mandate propeller guards on all instructional boats for children under age 18.

Suffolk Legislator Dr. William Spencer is also a member of the Centerport Yacht Club and he knew the Weiss family.

They are still too devastated to talk about it, but supportive, he says, of any measure that could help save lives.

"I'm hoping that as this moves forward, that there will be a time we can go to Albany with the family and you can hear from them," Dr. Spencer said.

According to the U.S. Coast Guard, there are some troubling statistics on propeller accidents.

In 2016, there were 171 boating accidents nationwide in which at least one person was struck by a propeller. There were a total of 175 injuries and 24 deaths.

The Dockmaster at Northport who was there the day Ryan Weiss was killed agrees that more needs to be done.