The QAnon conspiracy theory is centered on the baseless belief that Trump is waging a secret campaign against enemies in the "deep state."
WABC 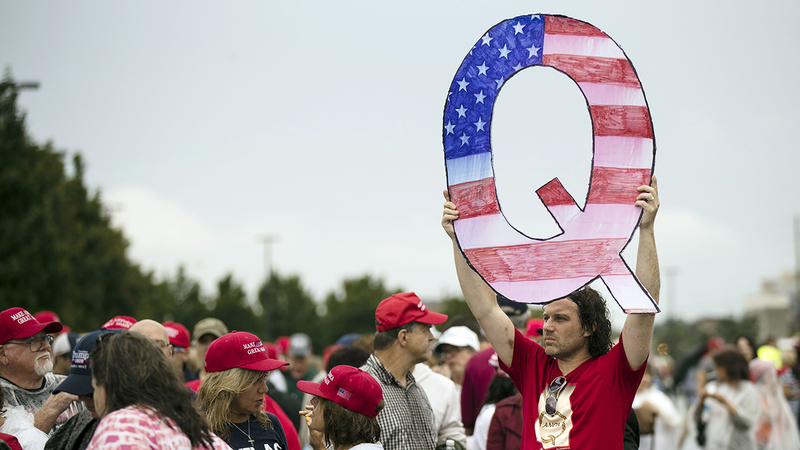 What is QAnon? And who are the candidates supporting this baseless conspiracy theory?

WASHINGTON -- A conspiracy theory centered around a diabolical plot to ruin the world is making its rounds on social media -- and one congressional candidate is voicing her support for the baseless theory.

The QAnon conspiracy theory is centered on the baseless belief that Trump is waging a secret campaign against enemies in the "deep state" and a child sex trafficking ring run by satanic pedophiles and cannibals. For more than two years, followers have pored over tangled clues purportedly posted online by a high-ranking government official known only as "Q."

The conspiracy theory emerged in a dark corner of the internet but has been creeping into the mainstream political arena. Trump has retweeted QAnon-promoting accounts and its followers flock to his rallies wearing clothes and hats with QAnon symbols and slogans.

"In this world view, there are pedophiles and Illuminati and just generally bad people everywhere. But they're hiding in plain sight, secretly pulling the strings," said Brooke Binkowski, an anti-disinformation expert.

Confusing social media users, followers sometimes use very real hashtags like #SaveTheChildren and many of them truly think that certain celebrities and major U.S. companies are part of a worldwide sex trafficking ring.

"[What] QAnon is convinced of is that they alone can find them. They have the capability, and that's what they are going to do. That's where the conspiracy theory part gets real dangerous," Binkowski said.
They have a new champion in political newcomer Marjorie Taylor Greene, who upset the GOP establishment by winning her the Republican nomination for Georgia's 14th Congressional District this week.

In a victory speech posted to social media, Greene said she decided to enter politics because the country is heading in the wrong direction.

"So the Republican establishment was against me. The DC swamp has been against me. And the lying fake news media hates my guts," she said. "Yep, it's a badge of honor."

In a series of videos unearthed just after Greene placed first in the initial June 9 Republican primary, she complains of an "Islamic invasion" into government offices, claims Black and Hispanic men are held back by "gangs and dealing drugs," and pushes an anti-Semitic conspiracy theory that billionaire philanthropist George Soros, who is Jewish, collaborated with the Nazis.

Leaders on the right have distanced themselves from Greene.

"I'm a very controversial person, but I even cringed at some of the things that she said," said Debbie Dooley, president of the Atlanta tea party and a Republican activist.

In Washington, Trump came out in support of Greene on Wednesday, all but assuring she would be welcome by Republicans in Congress, despite splinters in the party over her candidacy.

"Congratulations to future Republican Star Marjorie Taylor Greene on a big Congressional primary win in Georgia against a very tough and smart opponent," Trump tweeted. "Marjorie is strong on everything and never gives up - a real WINNER!"

The same sort of fake claims prompted a man to fire a rifle inside a popular Washington, D.C., pizza place as he attempted to "self-investigate" a conspiracy theory that Hillary Clinton was running a child sex ring from there. And recently, a woman allegedly of worked with supporters of QAnon to have her son kidnapped from foster care can be put on trial.

"QAnon fans, believe that -- or at least they act as though they believe that -- Trump is the savior of the United States and that they are helping him overturn this deep state plot," Binkowski said.