NYPD: Queens tenant accused of killing landlord claimed he hit him with mattress 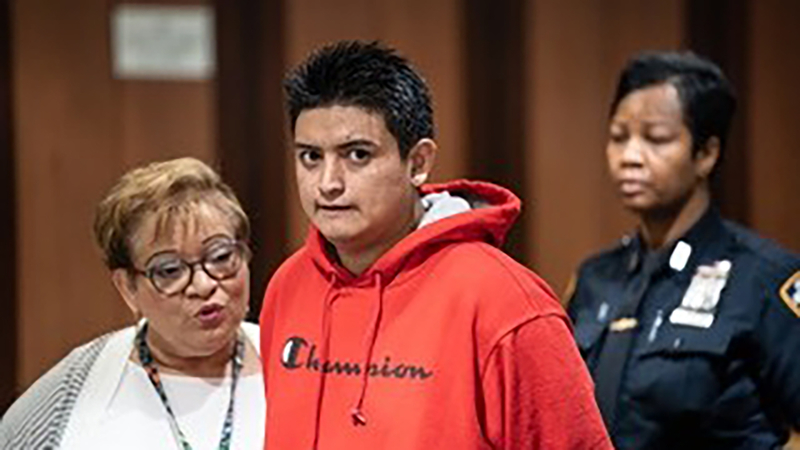 CORONA, Queens (WABC) -- The tenant in Queens accused of killing his landlord by pushing him down a staircase appeared in court Tuesday, as details continue to emerge about the case.

Police say 22-year-old Alex Garces pushed 71-year-old Edgar Moncayo down the front stairs of his building on 102nd Street in Corona just after 2 p.m. Saturday during a dispute over unpaid rent.

Ring video caught the encounter on camera, with Moncayo found at the bottom of a staircase unconscious and bleeding from the head.
EMBED More News Videos

A man is under arrest after his 71-year-old landlord was fatally pushed down a flight of stairs in Queens.

He was taken to Elmhurst Hospital in critical condition and was later pronounced dead of a traumatic brain injury.

In court, it was revealed that Garces initially told police he was moving a mattress and accidentally knocked the landlord down the stairs.

Moncayo lived with his wife in the basement of his home and rented out the floors above. Relatives say Garces had missed at least a month's rent payment and was being evicted but was threatening to leave without paying.

"The guy pushed my dad so furiously that my dad flew from front door to the concrete of the sidewalk," Moncayo's daughter Cristina Moncayo said.

Moncayo's grandson Juan Jose Farfan said his grandfather had even reduced the rent from $400 to $200 a month.

Moncayo and his wife are described as a gentle couple from Ecuador with three daughters and several grandchildren.

His family says he emigrated nearly 30 years ago and worked two jobs as a parking attendant so he and his wife could buy their home and raise their family.

The victim's daughter said her family is donating his organs as he would have wished.

Garces is charged with first-degree manslaughter and pleaded not guilty. Bail was set at $25,000 cash$50,000 bond.

If convicted, Garces faces up to 25 years in prison.